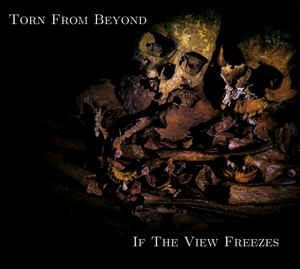 Background/Info: Torn From Beyond is a new dark-ambient project set up by Bert Lehmann who already experimented with obscure music as a member of Mortaja. The debut work of Torn From Beyond also is the first CD (after some CDR) released on Krater Recordings, which is a subdivision of Audiophob.

Content: This album is a frozen sonic adventure, which will instantly remind you of some famous projects in the genre –and I especially think to Raison D’Être. You get the impression of walking throughout a truly sound cataclysm made of resonating drones, ritual bells and overwhelming sound waves.

Like all good dark-ambient music “If The View Freezes” has a strong visual appeal leading you towards imaginary wet crypts and other places of horror. The work has been accomplished by some refined piano arrangements and an impressive number of effects. You will also notice multiple field recordings and samplings.

+ + + : Torn From Beyond reveals a disconcerting sound maturity revealing an impressive canvas of sounds and noises. The extra ritual flavor running through a few cuts makes it totally freaky. The tracks are elaborate and to compare this work with Raison D’Être is more than simply a reference. The opus features 8 cuts and there’s not a single one to throw away. Torn From Beyond has accomplished a real masterpiece.

– – – : I can’t find any single minus point to this album, but I’m sure there even is much more potential in this project than what came out on “If The View Freezes”.

Conclusion: Torn From Beyond accomplished a major release in the dark-ambient genre. This is a well-crafted work with a great visual appeal leading the listener to visit and reconsider his darkest and most perverted thoughts.

Tags: Torn From Beyond