Interview of Suicide Commando: one of the real Masters and instigators in the ‘Endzeit’-genre! 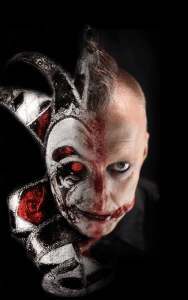 SL:“Endzeit Bunkertracks” definitely is a compilation on, which we might expect Suicide Commando; but what does it mean to you and what’s the importance of such a sampler these days?

Johan Van Roy: For me it’s still an honor to appear on the “Endzeit Bunkertracks” compilations as I also consider Suicide Commando as one of the main instigators of this harsh endzeit electronics style, like Front 242 will always be connected with EBM, I hope Suicide commando will always be linked to this style.

Not sure about the importance of the ‘Endzeit’ movement today as I think it lost some of it success over the last few years, so maybe this new sampler is a good opportunity to bring back new life into this stagnating scene ?!

SL: Can you remind us what the song “Monster” is all about and how did the remix by Avarice In Audio happened?

When Séba asked me to join the new “Endzeit Bunkertracks” it unfortunately was too early to come up with brand-new material from the next Suicide Commando album, so it actually was Séba who came up with the idea of letting Avarice In Audio do a special remix of “Monster”, and so it happened. I must admit I didn’t even know of Avarice In Audio before, but I think they came up with a really good remix.

SL: Any few ‘unknown/unsigned’ bands you would have liked to see on this sampler and why?

Johan Van Roy: Well I must admit that I’m not really up to date anymore on new unsigned bands in the scene, and the few discoveries I made over the last years eventually did find their place on the new sampler. I for example love the work from 2nd Face, a new band coming from Germany. Not new anymore, but definitely worth their spot are bands like Nano Infect, Acylum …

SL: What are the plans about this year for Suicide Commando?

Johan Van Roy: It will be a very busy year for Suicide commando with a new single coming up in summer, a new album scheduled by the end of the year, a vinyl compilation with old works and in between several new live shows in Europe and the US/Canada. And already thinking of some special things for 2016 as I’ll celebrate 30 years of Suicide Commando.

Since you’re here … … we have a small favour to ask. More people are reading Side-Line Magazine than ever but advertising revenues across the media are falling fast. And unlike many news organisations, we haven’t put up a paywall – we want to keep our journalism as open as we can. So you can see why we need to ask for your help. Side-Line’s independent journalism takes a lot of time, money and hard work to produce. But we do it because we want to push the artists we like and who are equally fighting to survive. If everyone who reads our reporting, who likes it, helps fund it, our future would be much more secure. For as little as 5 US$, you can support Side-Line Magazine – and it only takes a minute. Thank you. The donations are safely powered by Paypal.
Tags: Endzeit, Suicide Commando