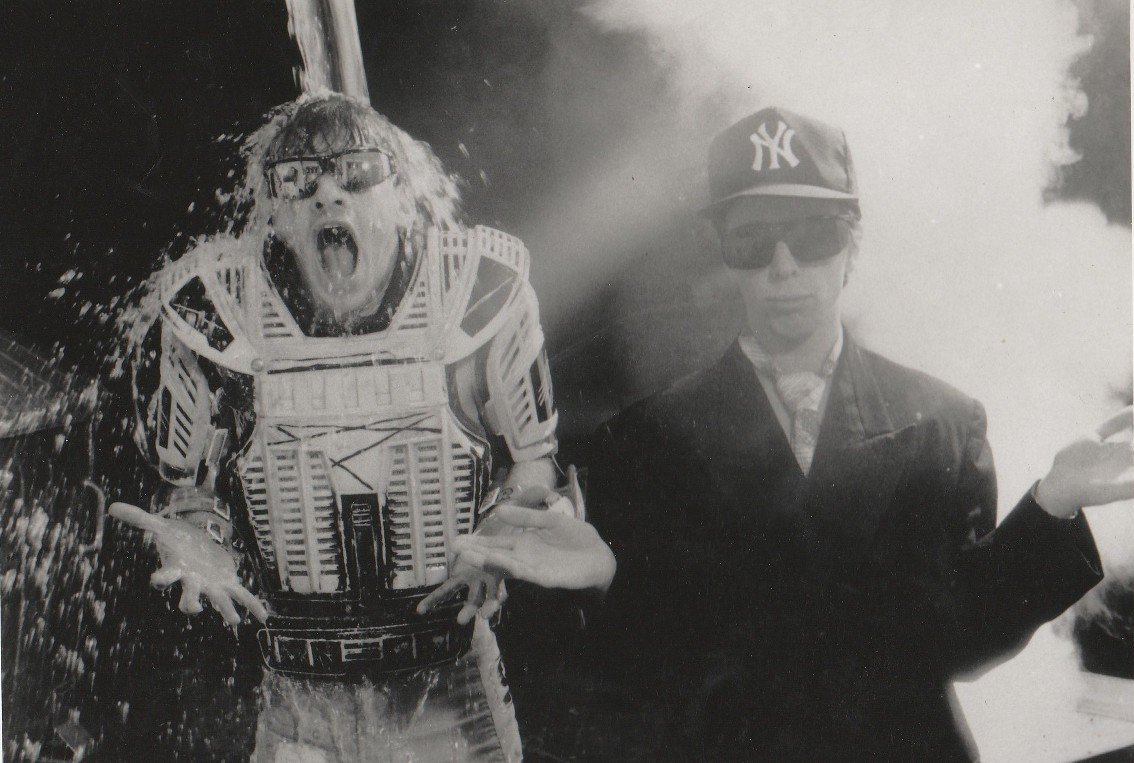 Jean-Marc Lederman posted a rather funny story on his Facebook profile relating some of the early story of his band The Weathermen. We were given his ok to make an article out of it.

After releasing “Ten Deadly Kisses”, things were looking good for The Weathermen. The band’s release schedule (a 12″ single every 4 of 5 months) since “Old Friend Sam” was paying off as both the band’s profile and their sales were picking up steadily. Not only that says Jean-Marc Lederman: “It was a rhythm that was perfect on an artistic point of view: quick enough so we would always have new stuff out to keep shops, the press and the fans excited and slow enough so we could go to the studio with fresh ears.”

Use whatever you find

The band didn’t have any equipment at the time, except a new Ensoniq ESQ-1 bought thanks to Jonas Van Espen, their manager at the time, and Herman van Laar (Jean-Marc’s publisher at Les Disques du Crepuscule as Kid Montana was still going on). Jean-Marc recalls: “We were dependent on going to the studio to record, something that was pleasing me a lot as the tactic was to use whatever we found there, especially if it was some new (to us) drum machine or synth.”

The studio was Ludo Camberlin’s, one of Belgium’s finest producer ever. Jean-Marc: “A man with great ears, not always easy to go along with, but so was/am I so it was a good fit. The place was in PIAS’ early Cureghem office, it was in the basement and pretty much a dump to be honest. But it felt good to be making music just below our record company as it made us feel part of a family with a common desire: making good music known.”

“As usual, we had nearly nothing when going into the studio,” Jean-Marc notes. “I had brought my Ensoniq and Bruce Geduldig a copy of The New York Times. We hooked up the Esq-1 to Ludo’s system (a Commodore sequencer driving a DX7) and Ludo made fun of the lone two midi slots in the american synth: ‘What?! No thru slot?!’.” You can hear it in Poison in the chorus brass sound and the bass drum, mainly. Jean-Marc also brought a 7″ to the studio, one that had made a great impression on him at the time: “Human”, by The Human League.

The track had a great drum beat and Lederman wanted to start from that: “Ludo programmed the sequencer which was driving an RX7 drum machine, I think. So, we got a drum beat going, of course it was weathermenized, and it had not a lot in common with what The Human League had. One can hear it in the toms playing in “Poison”, it’s the low drum hit that is going as a back beat. We hooked up the DX7 and worked out a real nasty bass sound starting from one Ludo had and then I played around for a while until we found a good groove which pleased us all. Once we had that, it was really fast, we sequenced a few ringing sounds and there was the skeleton of “Poison”. It was all written before the voice, as usual.”

Using the desk as an instrument and the arrival of Susanna

Ludo was also playing at the desk, using it as an instrument, not only as a mixing device. He would process lots of the channels through different effects, his favourite tool of the time being the Yamaha SPX90. Jean-Marc: “After a few hours of hard work and many, many laughs, we came up with a track that was ready for vocals. As usual, Bruce would open a carnet with bits and pieces of scribbling he had done and we were going through them. He wanted to tell a story about pollution, any kind of pollution, be it in the air or in the news or in human relationships, so it was very large. That is one part of the lyrics: the serious content embedded in a humorous song. The other part is, well, Susanna Stammer, Bruce’s alter ego and somehow the representation of a groupie going awol.”

Susanna was with the band since “Deep Down South”, it was the perfect Californian blonde in love with a bleek-and-far-too-serious electronic band. Jean-Marc: “She was dear to us and somehow fighting patriarchy and male clichés as much as showing how vain being in a band can be. Let’s not forget The Weathermen did came along a little bit because we found the electronic bands of the time so fucking grey and whining. She would also be our reality check meter, balancing our ideas and how we implemented them in the songs. Here, she found her way into the lyrics and into the track as she would appear as a pitched-up Bruce, switched on and off as explained below.”

As usual the band were trying to have a laugh and Susanna would in this song take the upper hand, making them look miserable and herself like a goddess-like creature that would go after the band members, after the drummer, after all the myths of being in a band, the groupies, etc.. Jean-Marc: “So, there you are: a very serious political stab at everything toxic in our life watered down by the story of Susanna. Finding the right vocal melody however wasn’t going to be easy, but eventually Bruce found something pleasing all of us. Now, you have to remember this was 1987 and Ludo had only an eight track tape machine and we had such need for all the effects that we had to “rehearse” all the mixes as all the effects had to be played “live” and be injected in the song in real time. It took us a long day to be able to coordinate it all and make no mistakes as the three of us were on the desk, switching channels on and off, going through the SPX90 as we prepared them. Ludo exercised more of his magic touch and there we were: on the second evening (I never work at night), “Poison” was on the tape.”

Jean-Marc: “I recall going up to Kenny the day after and all excited I gave him the final tape. It was released a few weeks later and immediately rocketed up: people loved it, PIAS’ salesmen loved it, we loved it and there you go it started to sell real solid. It actually was doing so well that Kenny wanted it to be remixed, something I never liked, but we were ok with it. Finally, three 12″ came out, the original version, one version I remixed with Ludo and the Snap remix (Ancilloti remix).”

And this is the story of Poison, the song that walked by itself. The 8-track tape itself was lost and never to be found again.