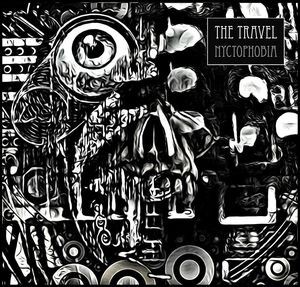 Background/Info: Behind The Travel is hiding Mike Redman who’s an artist of many talents. He’s the man behind Deformer and owner of Redrum Recordz, but he’s also active as a filmmaker, visual artist and producer.

The Travel is the newest sound project of this artist.

Content: The Travel sounds like a sonic travel featuring multiple stages. It starts off in a rather experimental and somewhat industrial way featuring heavy crashes, but rapidly moves towards a more dubstep orientated composition joined by spooky spoken words. The somewhat bombastic and heavily produced dubstep influence can be heard on the first part of the work. One song is even features Deformer. The global production is absolutely delightful.

The second part of the work is somewhat different. The Travel walks on cinematographic-minded paths. The work, featuring field recordings, becomes more experimental and a bit mysterious as well. There also is a surprising mix of dubstep and soundtrack influences on “Burned Wood”.

+ + + : “Nyctophobia” is a quite diverse piece of work revealing a successful dubstep element.

– – – : The diversity of the album makes it also less compact. You sometimes get the impression there’s a kind of duality between the sources of inspiration running through this album.

Conclusion: “Nyctophobia” is not that dark as the title indicates although it appears to be a somewhat obscure work moving in between multiple sonic ideas.