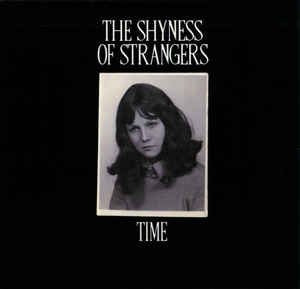 Background/Info: The Shyness Of Strangers is a solo-project set up by Vadim Kristopher who’s a Polish born Canadian. After a few digital releases he now unleashed his debut full length on the French label Unknown Pleasures Records.

Content: The name of the French label and this band have something in common. The inspiration from Joy Division makes it no doubt. The shyness Of Strangers sounds in the purest 80s cold-wave tradition reminding to Joy Division, but it also makes me think to the offspring between The Sisters Of Mercy and Suicide.

It first of all is a typical and 80s-driven guitar-wave album, but you’ll also find electronic parts on it. This mix makes it somewhat more original and not just a new copyist.

+ + + : “Time” is the kind of album that couldn’t have been released on another label than Unknown Pleasures Records. There’s this fascination for 80s music, but with something extra on top. That’s precisely what I like although it’s the kind of music that will ravish all new-wave freaks. I also noticed a few shoegaze elements and here again I can only, but express my fascination for this release. Great guitar playing, cold electronics, dark bass lines and cavernous vocals will bring you a great moment of pure entertainment!

– – – : In the long run some songs start to be a little bit similar, but you don’t hear me to complain. If you like one song, you gone like them all… but if you don’t, you’d better avoid listening to The Shyness Of Strangers.

Conclusion: I’ll not claim to have discovered a new cold-wave icon, but the album is for sure well-crafted and fully enjoyable. That’s what we expect from music isn’t it!?

Tags: The Shyness Of Strangers