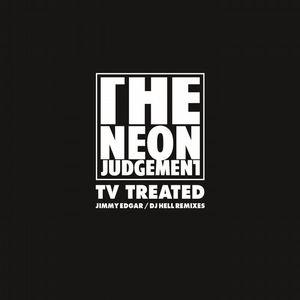 Content: The Neon Judgement belongs to the history of EBM and electro-underground music. The band officially announced their ‘retirement’, but is still accomplishing a few last concerts and we even get a few releases as well.

“TV Treated” belongs to the collective memory of the electro scene and entered into history as one of the first big hits of the band. The song remains a reference in the genre for its extremely icy sounds and arrangements while it never stopped to inspire other artists. More than 30 years after the composition of “TV Treated” the song has been remixed by two famous names from the wider fields of techno music.

Most of us are familiar with the electroclash living legend DJ Hell (owner of International Deejay Gigolo Records), which remixed the song in an interesting way. You get some groovy sequences, which are quite refreshing while the famous and extremely icy lead of the song is quite recognizable although transformed into a somewhat spooky and tormenting arrangement. This is an original remix and speaking for myself, definitely the best one.

Jimmy Edgar is a Detroit based producer who’s active in the wider fields of techno music for quite a long time. He composes in a rather minimal and intelligent techno format, which is recognizable in his remix of “TV Treated”. This version is more into minimalism and even experimental.

Conclusion: No doubt about it, there’s not any single remix that will be better than the original version of “TV Treated”, but both remixes stand for originality and are meant as a supreme recognition to the genius of The Neon Judgement and their visionary “TV Treated”.