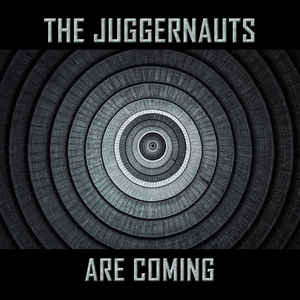 Background/Info: The Juggernauts is a Belgian band featuring Peter Mastbooms aka ‘BORG’ (music, lyrics and vocals) and Glenn Keteleer (music and producer). BORG is a veteran of the Belgian scene who was involved in bands like Vomito Negro and The Klinik. Glenn Keteleer got some fame with his Radical G project and is more involved into minimal-electronics and techno-body music. The Juggernauts released a promising debut-EP “Phoenix” in 2013, but we had to wait 3 more years to discover their debut full length.

Content: From start on you rapidly will recognize a typical old-school inspired EBM, which might remind you of bands like Front 242 and Nitzer Ebb while some darker elements are a bit in the Klinik-vein. The inspiration doesn’t bring anything new, but the global production reveals a high-tech approach.

This duo has found a right balance between a retro-EBM sound and the modern technology and knowledge of a techno-inspired production. It’s not exactly a reinvention of EBM, but it’s more into classical EBM with a refreshing touch on top.

+ + + : The Juggernauts are not just making good-old EBM, but they took care to accomplish it with a unique touch and approach. The sound is into pure vintage elements while refreshed with a powerful and modern production. There are several potential dancefloor killers. Even if the title song opening this album clearly doesn’t sound like a potential club-hit, this song is a real masterpiece for its global progression and sound approach.

– – – : The album features 10 songs, but 4 songs were already released on the “Phoenix”-album. We get updated versions instead, but only 6 new cuts is not that much for an album we had to wait for 3 years now.

Conclusion: The image of The Juggernauts looks pretty futuristic while the sound is clearly inspired by retro-EBM. The robotic image might be seen as symbolizing the modernism and minimalism of the production. This album clearly sounds like an exciting EBM opus revealing many outstanding cuts.