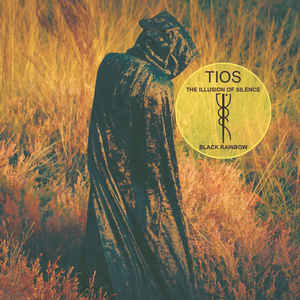 Background/Info: The Illusion Of Silence (TIOS) is an Italian project set up by Luca Bonandini. With the help of numerous guest musicians TIOS has accomplished its debut album released on the Russian Sulphur Flowers.

Content: “Black Rainbow” sounds like an invitation to join an artistic creation resulting from a true passion for acoustic instruments. It creates a neo-classic feeling mixed with ethereal vocal parts. Instruments like flute, violin, accordion, cello, viola, harmonica and piano have been used creating an authentic feeling. Several guest vocals contributed to the work as well.

It creates a delicious mishmash reflecting a beautiful transposition of sadness. The songs are covered by this fascinating flavor of melancholia, which appears to be the muse of many artists. The delicacy and refinement of “Black Rainbow” is a noticeable element, which can’t leave the listener unmoved. A few tracks reveal elements like ritual music or ballad passages and even cinematographic influences.

+ + + : “Black Rainbow” is a beautiful album, which appears to be a real accomplishment. The multiple instruments create a work filled with senses and emotions. Sadness has been adapted into an artistic composition.

– – – : Speaking for myself I regret the ethereal element emerging from the vocals has not been accentuated enough. It could have added some extra reverie to the work.

Conclusion: “Black Rainbow” is a dark title for a sweet, melancholic opus, which feels like a tender caress.

Tags: The Illusion Of Silence