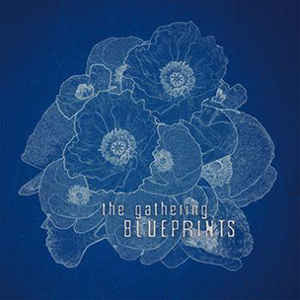 Background/Info: The Gathering is a band, which doesn’t really need any further introduction. Hailing from The Netherlands they quickly became an established and renowned formation active inj the wider fields of gothic music. The Gathering always has been a kind of sonic chameleon experimenting with multiple influences. “Blueprints” only confirms this taste to experiment with different ideas, but it first of all is a real particular work. The work reveals 24 songs (demos & unreleased songs) that were originally written in between 2001 and 2005, which is a lapse of time covering the albums “Souvenirs” and “Home”.

Content: “Blueprints” is a versatile piece of work, which by the way still features singer Anneke van Giersbergen who left The Gathering around 2007. The songs move from dark-rock influences towards fuzzy, gothic driven cuts to cinematographic-like music, to delicious ethereal passages.

There’s not that much difference between both discs, but I noticed some interesting cuts on the second disc, which even reminds me of Hooverphonic.

+ + + : The diversity of the work is for sure the main characteristic of this work and I think it was a real great idea to release this album. It reveals the prolific work of The Gathering, but with their attitude to only take the best cuts. You’ll easily notice that several tracks of this album are just little experiments resulting in several short instrumentals. But it also reveals a more film-like approach in their composition process. There are some great experiments and hidden treasures featured on “Blueprints” and I especially recommend the ethereal-like “A Noise Severe – Demo” and the film-minded “Box – Demo”. In a more sensual approach “A Life All Mine – Demo” is another attention grabber.

I also want to say a word about the informative booklet, which is giving you some info about each song of the album. It’s a great idea, which I’m sure will please all fans of the band.

– – – : I think it’s nearly impossible with such an album to get a few cuts with less substance because they were just little experiments that remained unaccomplished. I’m mainly referring to the instrumental cuts, which aren’t exactly the most successful part of the work.

Conclusion: The Gathering has exorcised some hidden songs and demos, which have been recovered from dust. It’s an interesting release and a perfect addition to the impressive discography of the band.