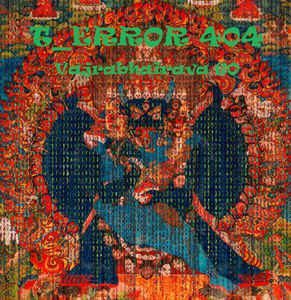 Background/Info: Vladimir Cherepanov aka ‘Denoizer’ is back on track with a new album featuring 18 (!) new cuts. “Vajrabhairava GO” celebrates the 10th anniversary of T_error 404 and also is the seventh opus from this project.

Content: If you’re already familiar with the work of T_error 404 you for sure know this band progressively evolved from harder industrial fields towards tribal-techno work reaching its apotheosis on the previous work “Buddha 2.0”. This new work has been announced as going back to the roots, but I experienced “Vajrabhairava GO” as a more sophisticated- and further experience in tribal-industrial music. Several cuts even remind me of Monolith for its dark-industrial tribal-techno format. T_error 404 mixes different influences together, which even touches elements of ritual music.

+ + + : I’m still convinced that T_error 404 is a band deserving a wider recognition. This artist composes a creative industrial approach mixed with tribal influences and hard, danceable vibes. It’s a diversified opus, which is totally accomplished and revealing multiple moments of pure sonic ecstasy! The tribal element is one of the most fundamental pieces of the work. There are not many artists exploring this sonic path and that’s what makes this opus refreshing and original.

– – – : It’s probably intentional, but I regret the unpolished aspect running through a few cuts. That’s for sure accentuating the industrial side of the work although creating a less high tech format. But my main regret is that this album is only available as digital format.

Conclusion: I’ve never been disappointed by T_error 404. He’s a talented artist creating something apart from the industrial scene and which isn’t repeating himself on every new work.

Since you’re here … … we have a small favour to ask. More people are reading Side-Line Magazine than ever but advertising revenues across the media are falling fast. And unlike many news organisations, we haven’t put up a paywall – we want to keep our journalism as open as we can. So you can see why we need to ask for your help. Side-Line’s independent journalism takes a lot of time, money and hard work to produce. But we do it because we want to push the artists we like and who are equally fighting to survive. If everyone who reads our reporting, who likes it, helps fund it, our future would be much more secure. For as little as 5 US$, you can support Side-Line Magazine – and it only takes a minute. Thank you. The donations are safely powered by Paypal.
Tags: Monolith, T_Error 404