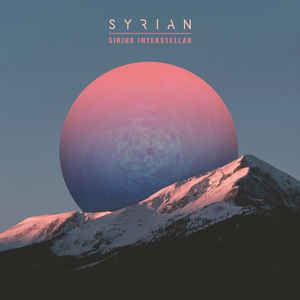 Background/Info: Italian formation Syrian gained recognition during the glorious days of future-pop music. After having released most of their work on the now gone A Different Drum and one single EP on Infacted Recordings, the duo struck back during late 2018 with this self-released 8-tracks album.

Content: Time seems to have no real impact on Syrian’s sound and influences. The tracks are mixing good-old danceable future-pop with pure dance-pop tunes. There also is their unavoidable space-like touch, which remains one of their main characteristics.

+ + + : If you’re nostalgic of future-pop music this “Sirius Interstellar” will definitely bring you great danceable vibes. Syrian remains great melody makers and future-pop experts. The vocals also remain an essential element in their songs. The final song “Hyperdrive” has something atypical although pretty dance as well, but more reminding me to Niels Van Gogh.

– – – : Time didn’t really affect Syrian’s sources of inspiration, but the point is that today future-pop music hasn’t a similar magic as 10-15 years ago now. I always have liked this band’s stuff, but it’s with pain in the heart I have to admit that the magic is a bit gone now.

Conclusion: Does Syrian has to evolve and try to create something more contemporary? It’s an interesting discussion we can have, but they simply do what they like to do. I however think they’ve to inject a new boost in their work and I’m wondering how they’ll go on.

Since you’re here … … we have a small favour to ask. More people are reading Side-Line Magazine than ever but advertising revenues across the media are falling fast. And unlike many news organisations, we haven’t put up a paywall – we want to keep our journalism as open as we can. So you can see why we need to ask for your help. Side-Line’s independent journalism takes a lot of time, money and hard work to produce. But we do it because we want to push the artists we like and who are equally fighting to survive. If everyone who reads our reporting, who likes it, helps fund it, our future would be much more secure. For as little as 5 US$, you can support Side-Line Magazine – and it only takes a minute. Thank you. The donations are safely powered by Paypal.
Tags: Infacted, Syrian