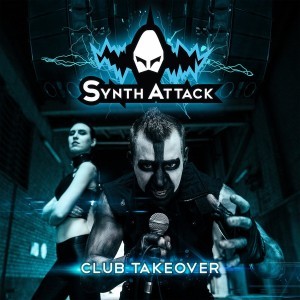 Background/Info: Based in Hannover (Germany) Synthattack is one of the newest sensations from the dark-electro dancefloors. Martin Schindler is the hidden force behind this band, which last year self-released the debut-album “To The Floor”. Synthattack now joined Dark Tunes to unleash their new opus featuring 9 new songs and 8 remixes.

Content: “Club Takeover” reveals many influences, which can be outlined as dark and electronic, technoid and EBM while we also can speak about aggrotech. The songs are driven by heavy dance kicks and carrying choruses with solid leads. Martin’s vocals inject some extra rage, which perfectly matches with the powerful production. You’ll also notice some trance-minded leads and breaks. “Club Takeover” is a title indicating its dance floor orientated goal.

The remixes have been made by great bands from the dark-electro scene. There are great contributions from C-Lekktor, Chainreactor and Stahlnebel & Black Selket while you’ll also discover remixes by Reaper, Binary Division, Parasite Of God and Suppressor. Last, but not least there’s also a “Single Edit” of “Unbreakable”.

+ + + : If you like hard and danceable dark-electronics, this album will for sure make you move! But it’s not only an album filled with pumping dance kicks and great, transcendental vibes, but still an opus revealing great sound treatments and I especially refer to “One Love, One Pain”, which is an absolute topper carried by a monstrous lead.

– – – : The main point that hurts is the somewhat repetitive sound formula the band is somewhat abusing from while a few passages are a little bit too techno-dance like.

Conclusion: Synthattack has created a real dance elixir mixing multiple influences. “Club Takeover” is a successful production in its genre and definitely one of the good productions of 2016!