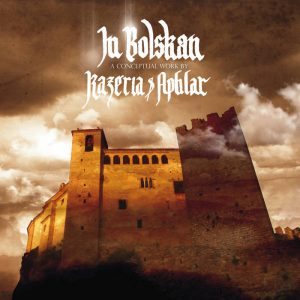 Background/Info: This album resulted from the common efforts between two Argentinia bands. Kazeria has already released multiple productions while Aphlar rather seems a new-coming formation. “In Bloskan” is a conceptual work inspired by old traditions and archetypes, which has been inspired by a travel Kazeria made throughout Aragón (Spain) and where the artist assisted to a ritual featuring numerous drummers.

Content: Kazeria used some field recordings, which are mainly characterized by martial cadence while adding typical neo-folk influences on top. The acoustic guitar play creates this typical ballad & reverie format, which has been however achieved by obscure electronic atmospheres.

The 4 songs are mixing multiple influences, but will mainly appeal for lovers of neo-folk and martial music. I also noticed some soundtrack atmosphere and even dark new-wave bass play. The album also reveals a hidden (fifth) cut.

+ + + : Some parts of this work are quite visual. You sometimes get the impression listening to cinematographic music. The martial cadence is absolutely great and reinforces this sensation. The global atmosphere is dark. I especially enjoyed the “One With These Stones”-track, which has been progressively built up and reaching a truly climax. This cut also is one of the most diversified pieces from the album. Next to the different influences you’ll notice half-spoken vocal parts.

– – – : “In Bloskan” doesn’t really innovate nor take you by surprise. The work sounds dark, but could have been more chilling. Except the aforementioned song the compositions are missing an apotheosis.

Conclusion: Kazeria & Aphlar have plans to renew their collaboration. This debut work is not setting the world alight, but is a pleasant and varied production mixing different-, but related genres.

Best songs: “One With These Stones”, “In Bolskan”.