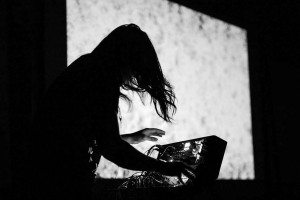 Background/Info: Surachai Sutthisasanakul aka Surachai is a Chicago based artist who collaborated with many artists like Alessandro Cortini, Richard Devine, Nordvargr and Otto von Schirach. He’s fascinated by good-old modular synthesizer, which for sure is a trademark of his sound. Surachai became a prolific artist always in search of new experiments and electronic paths.

Content: You’ll rapidly notice an omnipresent industrial influence, which has been mixed with electronic treatments and multiple sound manipulations. Surachai is not what I can call a typical musician. He’s more into sound research and creation, which moves the album to explore a kind of modern glitch work. I however think it’s nearly impossible to define this work as one precise and explicit genre.

“Instinct And Memory” is an impressive sound platform reassembling influences from very different sources. The industrial element is really important, but I can also mention a kind of electro-industrial approach reminding me of Dive, but in a more sophisticated format with a high-tech production.

+ + + : The global production of this album is ultra professional and impressive. The sounds literally blow you away. From a pure musical point of view, I was mainly impressed by the electro-industrial cuts and the IDM inspiration. I also have to mention the great and sexy and ritual-like front cover.

– – – : I was never a fan of glitch and that’s one of the few elements, which can’t totally convince me.

Conclusion: There are musicians and sound alchemists. Surachai definitely belongs to the second category, but still confirms to have great composing skills as well.