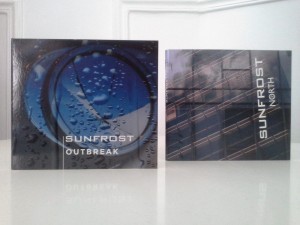 Background/Info: Sunfrost is a Parisian formation, which is has already been active since the early millennium years. It however took several of those years to accomplish their debut album “North” (2013) while they are now back on track with this new and self-released work featuring 9 songs.

Sunfrost is a real band featuring a singer, guitarist, bassist and drummer while you’ll notice a few synth arrangements in the background.

Content: They call their music ‘spleen-rock’, which is a sound that might appeal to fans of goth-rock and even dreamy pop-rock sound. The opening cuts are even covering some shoegaze ideas. The somewhat harder and darker cuts are the most noticeable ones and I here especially recommend “No Excuses”, which is a well-crafted and efficient powerful song.

The dark side definitely is the most inspiring one from “Outbreak”. From darker passages to some disturbing guitar layers to elevating choruses, this album reveals an interesting potential.

+ + + : Sunfrost definitely tried to find their own sound, which is merging multiple genres without becoming a total stereotype.

– – – : I can’t say that the vocals are less convincing, but I’m missing some passion in the way of singing. I think it’s all about production and maybe the main point to take care of for their further work.

Conclusion: “Outbreak” is not what I would call a groundbreaking opus, but it for sure is an enjoyable work featuring a few interesting songs.