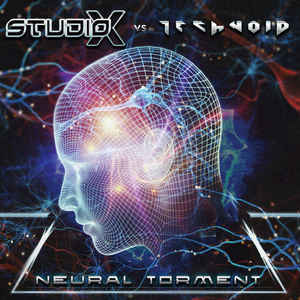 Background/Info: “Neural Torment” resulted from the common efforts between Australian sound guru and producer Lawrie Bayldon and Italian musician Roberto Ricci aka Technoid. Studio-X became a quite familiar name and a prolific artist active on the Alfa-Matrix roster. Next to his collaboration with Simon Carter, he also joined hands with Avarice In Audio.

Content: The main basis of this work clearly sounds inspired by techno music. But there are more influences running through this work. The debut cuts reveal impressive and hard noise treatments reminding me of the magic of Seb Komor. It sounds dark, furious and especially constructed with impressive sound manipulations plus enraged vocals.

We’re next moving throughout more ‘classical’ techno fields revealing passages with pitched vocals. And quite progressively we’re moving back to harder fields driven by stomping rhythms. The work becomes a bit more trance-like and industrial-minded, which might remind to Noisuf-X.

+ + + : I’m not that familiar with Technoid, but Studio-X ones more deals with a furious and merciless techno-genre mixed with dark and industrial elements. Both debut cuts are absolutely amazing for their writing and sound treatments. The final cuts are getting back to great electronic music merging techno together with industrial-rave. The work is quite diversified, but clearly revealing a few club stompers!

– – – : I’m missing somewhat cohesion between the songs. It feels a bit like both artists simply tried to achieve varied music ideas inspired by hard-techno fields, but maybe missing a guiding line.

Best songs: “Down On Your Kness”, “Cybergoth”, “Leave Us Alone”, “Soul Reaper”, “Where Is Your License”.

Since you’re here … … we have a small favour to ask. More people are reading Side-Line Magazine than ever but advertising revenues across the media are falling fast. And unlike many news organisations, we haven’t put up a paywall – we want to keep our journalism as open as we can. So you can see why we need to ask for your help. Side-Line’s independent journalism takes a lot of time, money and hard work to produce. But we do it because we want to push the artists we like and who are equally fighting to survive. If everyone who reads our reporting, who likes it, helps fund it, our future would be much more secure. For as little as 5 US$, you can support Side-Line Magazine – and it only takes a minute. Thank you. The donations are safely powered by Paypal.
Tags: Studio-X, Studio-X vs. Technoid, Technoid