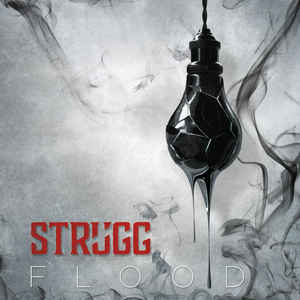 Background/Info: Strugg is a French combo, which previously released one album and one EP. “Flood” is their newest work, which is more like a double-EP. You first get 5 new cuts and next 4 songs taken from their EP “Disorders In Progress”.

Content: I remember the debut album “Kamikaz” (2013) revealing an interesting potential. “Flood” is more elaborate, but holds on the powerful mix between electronics and guitar. It’s a kind of electro-rock or industrial-rock sound driven by passionate vocals.

The guitar playing injects this typical industrial touch. The songs are heavy and rough while a dark atmosphere is recovering the songs.

+ + + : Strugg reveals an interesting progression in their global sound production. “Flood” sounds harsh and enraged while the new songs reveal a perfect balance between merciless guitar play and electronics. The opening song “Pull Me Out” is a terrific cut illustrating the evolution of Strugg. This is good-old crossover with a refreshing touch on top.

– – – : I got the impression that some songs are a bit short, but that’s not really a negative point. There are several great cuts featured, but maybe not a potential hit.

Conclusion: “Flood” is an album, which took me by surprise. Strugg is moving on a cool sonic path punctuated by rage and power, which might catch the attention of an established label.