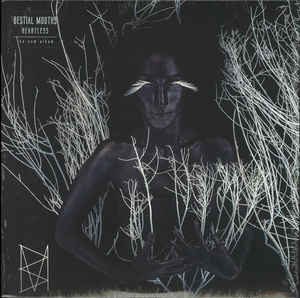 Background/Info: Bestial Mouths is a formation driven by the charismatic female singer Lynette Cerezo assisted by Christopher Myrick and Gustavo Aldena. The band previously released two albums plus one live opus and one remix album on vinyl format. The band joined hands with Cleopatra Records and unleashed the “Heartless”-album at the end of last year.

Content: The main characteristic of Bestial Mouths is the bewitching timbre of voice of Lynette Cerezo reminds me of Siouxsie Sioux. It injects a gothic flavor on top of the work, which is entire electro-like. The songs have been accomplished with dark and tortured sound atmospheres, where the voice sometimes becomes a bit ritual-like.

Sound-wise this work is driven by bombastic drum sections sometimes joined by epic arrangements. The electro style is now and then a bit retro-like. One of the most surprising cuts is without a shadow of a doubt the cover version of The Human League’s, “Being Boiled”, which was transformed into a totally new and obscure format.

+ + + : “Heartless” is an original opus for the mix of typically gothic-like female vocals and cold electronics. The songs are carried by heavy, bombastic drums injecting a very own style to the work. The songs are supported by overwhelming atmospheres, but other cuts are into pure vintage-like electronics. There are several cool cuts featured, but I have a preference for the somewhat ritual-orientated “Ceased” revealing a great balance between vocals and music. I like the icy synth lines and the global approach of this band.

– – – : “Heartless” is maybe missing what I would call a real hit although there are numerous noticeable songs. I’m not that fond of their Human League cover. It’s a creative transformation of the original song, but definitely not the best cut on this album.

Conclusion: “Heartless” is a successful album, which sounds like the offspring between a gothic-like singer and obscure electronic music. Both ingredients have been cemented with bombastic arrangements.

Since you’re here … … we have a small favour to ask. More people are reading Side-Line Magazine than ever but advertising revenues across the media are falling fast. And unlike many news organisations, we haven’t put up a paywall – we want to keep our journalism as open as we can. So you can see why we need to ask for your help. Side-Line’s independent journalism takes a lot of time, money and hard work to produce. But we do it because we want to push the artists we like and who are equally fighting to survive. If everyone who reads our reporting, who likes it, helps fund it, our future would be much more secure. For as little as 5 US$, you can support Side-Line Magazine – and it only takes a minute. Thank you. The donations are safely powered by Paypal.
Tags: Bestial Mouths