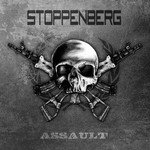 Background/Info: We all know Jan L as the master mind behind X-Fusion and Noisuf-X while we sometimes forget that he also set up Stoppenberg. A first EP “Telekinesis” was released in 2015 on his own label X-Beats. The work revealed a mix of EBM and techno treatments. “Assault” is the debut full length featuring 13 tracks.

Content: From start on you recognize the trademark of Jan L, which consist of raw sound treatments, solid bass lines and total dance power. The main difference with his other projects is the more pronounced technoid approach, which is based upon harsh electro-industrial manipulations and devastating bass lines.

“Assault” is the meeting point between EBM and industrial-rave music. This is a hard and merciless composition revealing an entire arsenal of harsh and menacing sonic manipulations. From dark sequences to sonar-like bleeps to somewhat retro-like sequences “Assault” clearly express what the title indicates: a kind of sonic ‘blitzkrieg’ to set dancefloors on fire. The songs are instrumentals, but you’ll notice several sampled passages.

Next to several potential club-killers, Stoppenberg accomplished a quite surprising, somewhat funny, but efficient cover version of the “Knight Rider Theme”. Stoppenberg is a band I’m linking to the work of Komor Kommando. There’s a similar taste and passion for sonic manipulations and dance vibes.

+ + + : The EP “Telekinesis” was an interesting debut, but “Assault” sounds harder and more mature. This is efficient music for clubs dealing with avant-garde electro styles like techno-body music.

– – – : A few more sampled samplings and even a few vocal lines would add something extra to some of the songs.

Conclusion: Stoppenberg is the newest challenge of sound guru Jan L and “Assault” clearly has the potential to make a serious impact on the underground sound community      and its DJ’s.