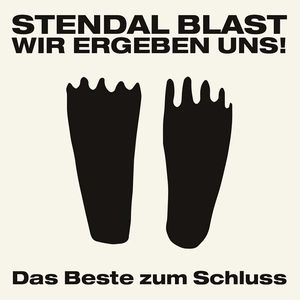 Content: Stendal Blast strikes back to say farewell! “Das Beste Zum Schluss” is a ‘best of’-album, which I think is a well-deserved gift for the band and their numerous fans. Kaaya Hoyda (vox) and Bernhard Lottes (both were also involved in Cyan Kills E.Coli) were the leading force behind this band, which was mainly active during the 2nd part of the 90s and the early millennium years. Stendal Blast released 5 albums and several EP’s on which they worked together with artists like Veljanov and Blutengel.

The sound of Stendal Blast was something special and mainly inspired by some of the biggest German gothic formations. So there’s this unique and somewhat theatrical way of singing that might be linked to bands like Das Ich and Goethes Erben. The music was pretty gothic as well and yet is interwined with many other influences like electronics, rock and even punk. This ‘best of’ is a real cool opportunity to rediscover Stendal Blast by some of their most famous songs. The band was mainly famous in their homeland of Germany, but had some fans abroad as well.

This album sounds like pure nostalgia to me and mainly because it’s the kind of sound that has somewhat disappeared from the current gothic standards. There’s this typical 90s gothic touch, which excels at “In Diesem Sinne” bringing us back to 1995 and the debut-CD “Das Verdorrt.” This song is pretty representative for Stendal Blast. It reveals their dark inspiration, and also the writing skills of the band. This song progressively moves into hard and somewhat bombastic arrangements.

The upcoming song “Neuer Mensch” (still taken from the debut album) is interesting for its great, carrying chorus and the perfect balance between guitar and electronics. It has been another essential aspect of this band’s work. “Kurzer Aufenthalt” (taken from the 2nd album “Alles Liebe”) remains one of the most surprising songs on which the band clearly reveals their wider arsenal of influences. This song clearly sounds gothic-minded, but with the vocals in a half-minded rap style.

Next to the bombastic ingredients, Stendal Blast also composed more refined songs and I here refer to “Der Spanische Mond.” One of my favorite songs remains “Wo Führt Das Hin?” taken from the “…Morgenrot”-album. There’s a cool and overwhelming melodic loop running through this song. In a heavier style I have to mention “Fette Beute”, which also was the title song of their 4th opus released in 2002.

Another great song is “Schmutzige Hände”, which was the title song of their 5th and last studio album (2004) and deals with a refreshing goth-pop approach. “Die Frau Im Roten Kleid” and “Paradies” both were other noticeable songs taken from this album and, which here again were exploring some pop fields.

The album finally comes to its ultimate end with the song “Adieu”, which was composed for this special circumstance.

Conclusion: There’s no better way to (re)discover Stendal Blast than by the listening of this ‘best of’. This German formation definitely belongs to the collective memory of the German gothic scene that was active around the millennium years.

Since you’re here … … we have a small favour to ask. More people are reading Side-Line Magazine than ever but advertising revenues across the media are falling fast. And unlike many news organisations, we haven’t put up a paywall – we want to keep our journalism as open as we can. So you can see why we need to ask for your help. Side-Line’s independent journalism takes a lot of time, money and hard work to produce. But we do it because we want to push the artists we like and who are equally fighting to survive. If everyone who reads our reporting, who likes it, helps fund it, our future would be much more secure. For as little as 5 US$, you can support Side-Line Magazine – and it only takes a minute. Thank you. The donations are safely powered by Paypal.
Tags: Stendal Blast