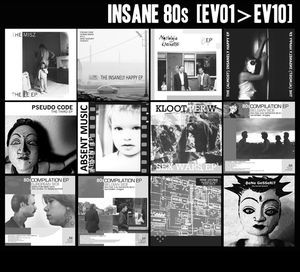 Content: EE Tapes brings us once more back in history to be awakened in the darkest and most underground realms of the 80s electronic music scene. For all of those who have been the lucky ones to live during the 80s it for sure remains a special and unique decade. A few names became famous bands and so-called pioneers of industrial music, EBM, synth-pop and related genres, but the main bands remain pure underground and sometimes simply unknown to a wider audience. I remember some of these bands I saw on stage or simply during rehearsals in a wet cellar and, which never released any ‘official’ cassette.

That’s a bit the spirit of this new compilation by EE Tapes, this record features 12 bands and 19 songs. It also is a kind of compilation taken from the EE Tapes series of 10 vinyl – 7” and mainly reveals some forgotten and/or simply unknown formations, mainly from Belgium. “Insane 80s” is a kind of electronic legacy from those ‘forgotten ones’ and the least I can say is that some of them really had a strong potential.

So fasten your seat belts and get ready to travel back in time to enjoy the typical cold and somewhat experimental electro-pop of Human Dance and their cool “Hex!”. The 80s decade will be always be remembered for the great new-wave productions. Nostalgie Eternelle will not immediately ring a bell, although they revealed themselves as a real creative and cool experimental new-wave group with what we now would call great ‘vintage’ sound treatments.

The 80s was all about experiments and The Misz remains one of the most talented and yet forgotten projects in the genre. They were featured with 3 songs on this sampler and I recommend “Le Joli Jardin” and “A La Recherche De B.I.” as the most representative cuts. The electro-wave of Pseudo Code –which is a band I recently (re) discovered thanks to EE Tapes, appears to me as one of the formations with the biggest potential, but which simply remained pure underground music. Their electro-wave music is a pure lust for music lovers.

One of my favorite formations is Nine Circles, which again is a well-kept secret of the Belgian underground scene and yet dealing with a more accessible sound. This is great and sensual, evasive electro-pop. Both featured songs of this band are simply worthy of examination.

BeNe GeSSeRiT became one of EE Tapes’ fetish formations and their experimental creation always has been something special, which might appeal for anti-music lovers in the vein of Throbbing Gristle.

Kloot Per W for sure is the most famous and recognized Belgium artist of the sampler and it for sure was because of his involvement into Polyphonic Size and The Employees while he also did some interesting solo-work. Another famous group is Opéra Multi Steel, which also is one of the few bands still active. They here remind us of their early and pure new-wave inspired sound.

Subject is a last band I want to mention and, which will possibly ravish fans of electro-wave music.

Conclusion: The experimental input of all these bands probably was the reason why they never gained a wider recognition, but this compilation is a well-deserved yet posthumous consecration.

Since you’re here … … we have a small favour to ask. More people are reading Side-Line Magazine than ever but advertising revenues across the media are falling fast. And unlike many news organisations, we haven’t put up a paywall – we want to keep our journalism as open as we can. So you can see why we need to ask for your help. Side-Line’s independent journalism takes a lot of time, money and hard work to produce. But we do it because we want to push the artists we like and who are equally fighting to survive. If everyone who reads our reporting, who likes it, helps fund it, our future would be much more secure. For as little as 5 US$, you can support Side-Line Magazine – and it only takes a minute. Thank you. The donations are safely powered by Paypal.
Tags: Insane 80s [EV01>EV10]