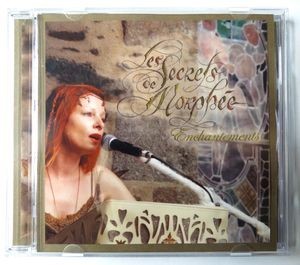 Content: Les Secrets De Morphée is one of these French ethereal bands I instantly became addicted to. After 3 poignant albums “Chuchotements”, “5 Avril” and “Chimères” Karin Mérat released her 4th opus entitled “Enchantements.” The title has something ‘magic’, which is maybe related to the concept of this recording. It indeed is a live recording that happened on the 08th of August 2014 in Mauron (France).

We get a total of 16 songs featuring 5 new cuts. “Enchantements” is an interesting release as it’s an opportunity to go back to the earlier work of this French talented artist. I expected Karin Mérat to be accompanied by a kind of mini-orchestra, but referring to the live extracts I found on the artists Facebook page it all looks like she was alone on stage. That’s maybe a pity, but on the other hand it’s an element you really don’t hear when listening to the album. But a real regret is that there’s not much interaction with the audience and I even have some doubts if this show took place in front of many visitors.

Anyway, the music of Les Secrets De Morphée remains pure lust. There’s a delicious duality between Mérat’s heavenly voice and the orchestral arrangements in her work. When re-discovering her music I can’t get away from the poignant and overwhelming cinematographic aspect of the music. The sound is filled with drama and reverie. The evasive side of the music is not a coincidence as her work is inspired by the world of Elves. The songs have been performed with grace and passion, “Ethan” is one of the absolute highlights. This song reminds me of the dreamy and mystic universe of Qntal, which is reinforced by the Latin vocals. Mérat sings in different languages.

Somewhere in between sweeter and even lullaby-like songs (the title “Lullaby” is not coincidental) on one side and harder orchestral and dramatic cuts (cf. “Tempes”) on the other. This album is an enlightening experience punctuated by 5 new cuts, which you’ll discover at the final part of the concert/recording.

The influences and global style are not that different of what we’ve heard from Karin Mérat. I have a preference for the more into sadness-sounding “Les Vaines Danseuses” while the beautiful and totally ethereal-like “Wild Roses” is nothing else, but a new masterpiece.

Conclusion: This is a sweet and evasive gift for all the fans of Les Secrets De Morphée. It’s a fragile and emotional caress for the mind, however I’m just missing a bit more live feeling.