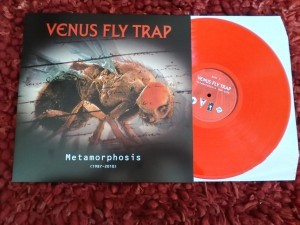 Out now is an extended upgraded vinyl version of the previously released Venus Fly Trap compilation “Metamorphosis 1987 – 2007” on Big Blue. Pressed on red vinyl (including a download card), the Venus Fly Trap compilation “Metamorphosis 1987 – 2010” holds 11 tracks from 1987 up until 2010, just before their “Nemesis” album was released.

The vinyl is limited to just 500 copies and can be ordered right here.

Formed in Northampton (UK) after parting company with electronic outfit Attrition in 1986, Venus Fly Trap released 7 studio albums between 1988 and 2011. The band was formed by Alex Novak (vocals, formerly of Religious Overdose, Attrition, and The Tempest) and John Novak (guitar, vocals), and Tony Booker on bass guitar prior to their debut twelve-inch single “Morphine” in March 1988. By the 2000s the permanent members were down to Novak and Denton, and they released their latest album, “Nemesis”, in 2011.

Since you’re here … … we have a small favour to ask. More people are reading Side-Line Magazine than ever but advertising revenues across the media are falling fast. And unlike many news organisations, we haven’t put up a paywall – we want to keep our journalism as open as we can. So you can see why we need to ask for your help. Side-Line’s independent journalism takes a lot of time, money and hard work to produce. But we do it because we want to push the artists we like and who are equally fighting to survive. If everyone who reads our reporting, who likes it, helps fund it, our future would be much more secure. For as little as 5 US$, you can support Side-Line Magazine – and it only takes a minute. Thank you. The donations are safely powered by Paypal.
Tags: Venus Fly Trap