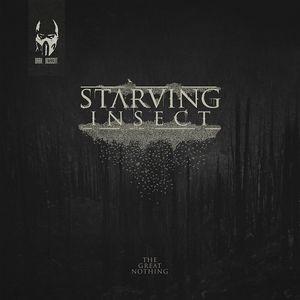 Content: Starving Insect is the artistic exposure for Swedish producer Alexander Kassberg. I honestly never heard of the man before who seems to be involved into another project as well (cf. Despairfull Tomorrow).

“The Great Nothing” is the first full length album for this project, which previously released a few digital files. None of the previously songs are on this album, which features 8 songs. The opening tracks are mainly carried by a hard kick, which sounds a bit industrial-like although you can feel the techno input. The debut sounds pretty rudimentary and even experimental while dark synth parts hang over the production. It definitely starts in an experimental style, which can’t fully convince me.

“There Are No Doors” is the 4th song on the tracklist and the first real noticeable song. There’s no other definition than ‘industrial-techno’ music for this song. There still is a heavy bouncing and rough big kick, which is now merged with a cool, dark electronic tune. “IDDQD” sounds a similar vein, but is more elaborate in writing and sounds. You here will notice a somewhat melodic sequence running through the song, which is joined by cool sweeps and a few spoken samplings. There also is a trance-minded break featured in this cut, which makes it more diversified.

Industrial- and techno music are in perfect harmony on the last songs. This is a remarkable alternative format for techno music and I’m sure this is the kind of music that would set industrial dancefloors on fire. “Visions Of The Blind Dead” is a noticeable song in the genre. The last track sounds a bit quieter and more into an atmospheric approach, but progressively evolves into a great and mysterious finale.

Conclusion: After a rather hesitant introduction this album progressively evolves into a dark and industrial-kind of techno music, which sounds rough and exciting.