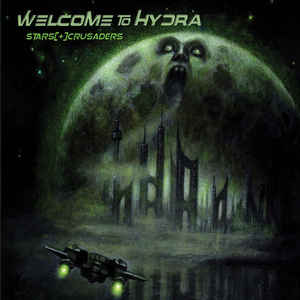 Background/Info: Three years after their debut album “New Horizons” the Italian electro-pop formation Stars crusaders takes away on a new mission through the future, awakening at the year 2517 where ‘all humans are moving to Hydra, looking for a new era of peace and prosperity, but a dark shadow appears on the horizon’.

Content: Stars Crusaders are fascinated by s/f and are dealing with electro-pop music. They already released cool productions, but this new opus definitely sounds as the accomplishment of a still young, but talented formation. It’s not just electro-pop music, but a creative composition, which sounds powerful and sometimes reminding me of future-pop.

“Welcome To Hydra” sounds a bit like the offspring between Assemblage 23 and De/Vision (also for the vocals) with an extra and essential own touch on top.

+ + + : “Welcome To Hydra” doesn’t really take me by surprise, but confirms the growing maturity of a promising band. It’s not only a danceable and powerful electro-pop sound, it also is an elaborated composition carried by great melodies, evasive passages, some vintage electronic treatments and charismatic vocals. There’s a real harmony between all elements while this album features several brilliant cuts. There’re also a few cuts with female backing vocals and especially “Behind The Mirror” is a masterpiece!

– – – : I’m a little less convinced by the calmer and into reverie-like songs. But on the other side it also brings a more restful passage into this energetic pop composition.

Conclusion: The futuristic vision of Stars Crusaders and their vision of Hydra definitely appears to be a place of relief, but also great music! Up to 2517!

Best songs: “Behind The Mirror”, “Soulless”, “The Great Exodus”, “Under Attack”, “Gemini”.