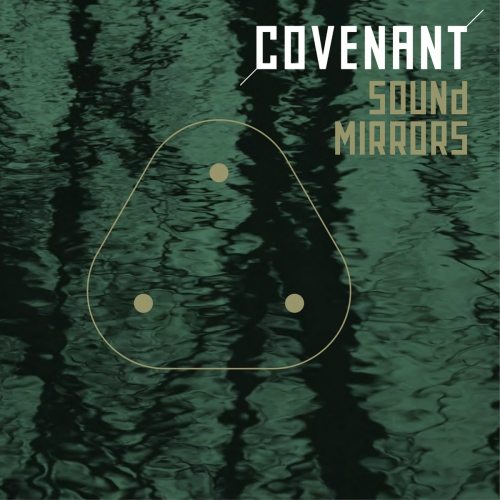 (By our Norwegian correspondent Jan Ronald Stange) Covenant’s new single ‘Sound Mirrors’ (available here on vinyl and CD), released August 26th, gives us a first impression of their forthcoming album ‘The Blinding Dark’ (available here for ordering). For the first time ever, the Swedes address distinctly topical events in world politics: the refugee crisis with its accompanying hysteria and the anxiety about the future of a European continent that looks forward into uncertainty.

“Sound mirrors” were acoustic mirrors that looked like giant stone ears, placed along the English coast between 1916 and 1930 in order to warn of approaching planes or war ships. Their elliptical shape bundled acoustic signals, and they were considered to be both technological and constructional masterpieces. Faster planes and especially the invention of radar made sound mirrors obsolete later on, so today, they are merely stone witnesses of bygone times along the southern and north-eastern coasts of England. The reference to the refugee crisis and creeping radicalisation of Europe becomes particularly obvious when hearing Covenant’s lyrics for the corresponding song.

“I was reading an article about this British pre-WWII project for early warning from attacks across the Channel, called Sound Mirrors. They were designed to amplify incoming sound from enemy aircraft enough to allow the defense to take them out before they could pose a serious threat.

My reading coincided with the refugee situation in Europe. That ability to anticipate possible scenarios is key to our survival from an evolutionary point of view. But we also have an equally amazing ability to ignore facts that make us feel uncomfortable or frightened. We can watch terrible things unfold right in front of us and still act as if nothing is going on. We buy ourselves a better conscience by sending some used clothes or money, we sign some petitions online, perhaps we write something heartfelt and compassionate on Facebook and then we go on with our comfortable lives.

But when the people suffering over there come knocking on our door, asking for a bit of the safety and prosperity we enjoy, that thin veneer of compassion and generosity cracks and our selfishness, our fear, our prejudice is suddenly all too apparent. And to my mind that’s because we ignore what we actually know:
There is no we versus them. There is only us. And there is only one world.

And when we see the truth of that simple fact and really absorb it so we can start acting on it, then there will be hope for us. Then we won’t need early warning. But I’m not sure we are capable to take that step at all. And that makes me terribly sad.“

Musically, the band does not miss out on anything, delivering a club smasher that harks back to single classics such as ‘Stalker’ or ‘Last Dance’. While unusual splashes of colour enhance the overall picture, ‘Sound Mirrors’ is bound to become an enduring earworm that will soon set dancefloors aflame.

It is available for ordering here as CD and limited edition 4 track 12″ vinyl.