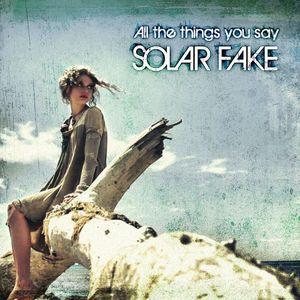 Content: After having released 3 albums with Synthetic Symphony, Solar Fake now joined Out Of Line to unleash the 4th full length of the band in history. This band set up by Sven Friedrich (Dreadful Shadows, Zeraphine) first released this EP “All The Things You Say”.

It’s hard to say if the title song has a real potential to become a hit, but it’s a beautiful song with a delicate electro-pop approach. There however is a harsher element running through the song injecting a somewhat naughty aspect. “All The Things You Say” sounds less powerful than the previous work of the band, which is the biggest surprise of this EP.

Lord Of The Lost did a noticeable remix of the song by adding powerful guitar riffs. There’s a perfect balance between electronics and guitar and that’s the way this song sound at its best.

Rotersand is an interesting name to get for a remix. The song has been reworked into a sophisticated version with a somewhat surprising lounge and evasive approach on top.

Last, but not least there’s a kind of b-side song, which is a live and acoustic version of “The Pages”. The original version featured as final song at the “Reasons To Kill” album already was a quiet piece of music. This version sounds delicate and melancholic through the piano play.

Conclusion: I’m glad to hear that Solar Fake is back on track, but I can’t really speak about a potential hit song.