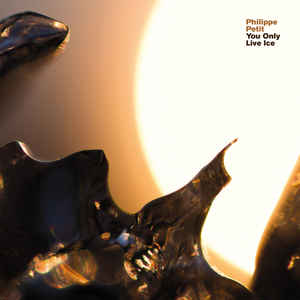 Background/Info: Philippe Petit is a familiar and recognized artist at the wider fields of experimental- and ambient music. This French artist has already been active for years now and we sometimes forget he’s a kind of veteran. He will be always associated with his own labels BiP_Hop and Pandemonium Records, but we also know him from his multiple collaborations with other artists like Lydia Lunch, Edward Ka-Spel, Foetus, Cosey Fanni Tutti ao.

Content: This album features one short- and one long duration track, but both are quite comparable in sound and influences. The title of the opus clearly reveals the imaginary universe Philippe Petit is inviting us to join. We’re visiting an icy universe, which is transposed into a kind of soundtrack creation.

This work is mainly made of solid and monotonous sound waves filled with some extra field recordings and multiple little noises. You better use headphones to enter in the subtle details of this work. The details are essential elements, which are constantly emerging from the background, like distant, ominous noises.

+ + + : “You Only Live Ice” is an album you have to discover in the right atmosphere and the right condition. You have to be alone or at least with people around you who’re ready to share a similar passion for ambient music. You have to close your eyes, use headphones and simply focus on the sounds coming through. You’ll rapidly notice that the monotone aspect of the work is interrupted by some passages with a higher volume and/or where an extra dark sound layer joins in.

– – – : The sound universe of Philippe Petit has been always characterized by certain degree of minimalism and experimentalism. It’s not exactly an artist that will make you dance, but he’ll unlock the door of your imagination and maybe your most secret fantasies. That’s precisely why this work is not exactly the most common-line and definitely not the most accessible one. You truly have to be addicted to this kind of music otherwise you should avoid such an experience.

Conclusion: Philippe Petit makes you sail upon the darkest waves of your imagination where you’ll have to face an ocean of buried visions.