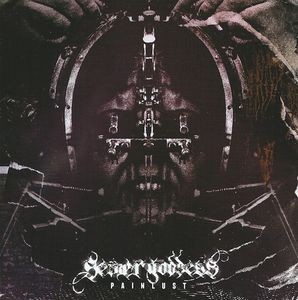 Content: In less than 10 years Sewer Goddess has released an impressive catalog although the productions are not always easy to get your hands on. Five years have passed since the official debut album “With Dirt You Are One”, which was released by Black Plagve as well. The band has worked with multiple labels, but joined forces again with Black Plagve to unleash this new death-industrial assault.

“Painlust” is not exactly what you might call a ‘feel-good’ album. From the very first notes you’ll feel a kind of obscure sound coming out your speakers. It for sure has more impact when using headphones, but I personally prefer discovering this kind of music when played loud. The work reveals impressive dense sound layers mixing harsh industrial elements and tormenting ambient passages.

“Painlust” definitely sounds like a call for the apocalypse! It sounds pretty freaky and I recommend listening to “Flog”, which will give you a real frightening experience. But in the end that’s precisely one of the most essential items we’re looking for when listening to this kind of music.

This work is a non-stop trip throughout the darkest and I even dare to say most perverted realms of sound. Just pay attention to “Black Meat And Bones” leaving no doubts about the goal of this duo.

‘There’s only one God and his name is death’ perfectly illustrates the evil inspiration from Sewer Goddess. This work sounds like an antidote to religion, inviting you to join the path of evil.

But behind the frightening messages and haunting atmospheres I also discovered great sound manipulations. There’s a part of noise aside of the industrial elements, which totally comes through on, “Get The Rope.” This cut reminds me a bit of early industrial pioneers like The Swans and even Einstürzende Neubauten, but with some extra demonic touches on top. I especially like the great guitar treatments and percussion parts. “Melena’s Mask” is the 6th and final song revealing the cold and somewhat sterile vocals of Kristen Rose. The track progressively evolves into pure noise and terror while we here again notice heavy guitar playing.

Conclusion: “Painlust” simply confirms the growing impact of Sewer Goddess, which is nothing less than an invitation to enter the depths of hell.

Since you’re here … … we have a small favour to ask. More people are reading Side-Line Magazine than ever but advertising revenues across the media are falling fast. And unlike many news organisations, we haven’t put up a paywall – we want to keep our journalism as open as we can. So you can see why we need to ask for your help. Side-Line’s independent journalism takes a lot of time, money and hard work to produce. But we do it because we want to push the artists we like and who are equally fighting to survive. If everyone who reads our reporting, who likes it, helps fund it, our future would be much more secure. For as little as 5 US$, you can support Side-Line Magazine – and it only takes a minute. Thank you. The donations are safely powered by Paypal.
Tags: Sewer Goddess