(By our Norwegian correspondent Jan Ronald Stange / Karisama Records press release)
The Norwegian industrial/goth rock band Seigmen released five classic albums between 1992 and 1997: Pluto, Ameneon, Total, Metropolis and Radiowaves, but only on CD, not vinyl. Karisma Records, the record label who holds the publishing rights to the bands releases from the 1990’s, wanted to do something about that, correlating with the 30th anniversary of Seigmen in December 2019.

Otto-Egil Sætre, Music Team Administrator at Karisma, ecstatically elaborates:
We knew that the Seigmen fans are passionate and enthusiastic, but we never imagined reaching our goal in just a few days. We are very, very grateful, and the box set is definitely happening now!

We’re going to release all of the albums on both CD and vinyl, and, if the fans want us to, we’ll also release a limited and exclusive vinyl box set 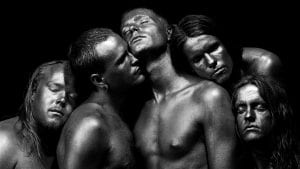 The box set will include all the albums om 180 gram colored vinyl, exclusively for the box. Total, Metropolis and Radiowaves will be expanded to 2LP sets, with selected B-side tracks as bonus. There will also be a booklet written by the bands manager Øystein Ronander, a Seigmen slipmat for your record players – and a CD with carefully selected unreleased material. These will be exclusively made for the box, and will not be available separately.

We’re also gonna make a limited Monsun 7″ vinyl single – made in 250 copies, and only available in this crowdfunding campaign. The B-side track “Peter Parker Theme” will not be included in the box set

For the most die-hard collectors out there, we will also make a few complete test pressing sets available for purchase. These will be numbered, and housed in white, signed & numbered outer sleeves.

Have a listen to the Seigmen discography while waiting for December: