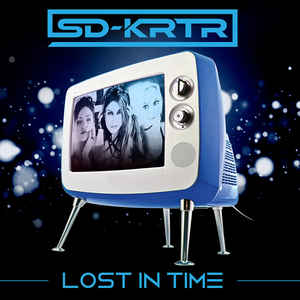 Background/Info: Behind this new name reinforcing the Alfa Matrix roster is hiding Simon D Carter. This British DJ and producer was already involved with several projects, but got some fame as part of Studio-X (feat. Simon Carter). “Lost In Time” is a solo-album and yet not totally solo as he asked several female guest singers to join in. We earlier this year already discovered the “Rise”-EP featuring Noemi Aurora (Helalyn Flowers) while a previous album “Retro Electro Wave/The Remixes” got released as well.

Content: I honestly didn’t know what to expect and got really surprised by the dance-stuff approach. Simon Carter clearly deals with techno and dance music while he also experiments with some d’b’n patterns and a few electro-pop influences. He got the help of seven female singers. Most of them are totally unknown, but the most noticeable names are Noemi Aurora (singing on “Rise”) and Lis Van Den Akker (who already sung on Psy’Aviah songs).

+ + + : All I can say is that this is a professional and high tech production, which will appeal to lovers of dance music and other commercial techno productions. The contribution of most vocalist is one of the main strengths of the work. Simon Carter clearly has a nose to find talented singers. It remains pretty surprising to hear Noemi Aurora singing on more ‘commercial’ music, but all the vocalists are absolutely fabulous. Sound-wise “The Girl From The Station” is one of the single cuts with some pop approach and I would have liked to hear more from this.

– – – : This album is a real challenge and especially as being released on an ‘underground’ label. This work has nothing in common with underground music and even sounds miles away from traditional electro-pop fields. This work is a great production, but maybe not on the right label.

Conclusion: I’ve been quite surprised discovering this album, which is clearly meant to conquer dance and techno clubs. I guess if Simon Carter wouldn’t have been familiar with Alfa Matrix, this album would have never been released on this label.

Since you’re here … … we have a small favour to ask. More people are reading Side-Line Magazine than ever but advertising revenues across the media are falling fast. And unlike many news organisations, we haven’t put up a paywall – we want to keep our journalism as open as we can. So you can see why we need to ask for your help. Side-Line’s independent journalism takes a lot of time, money and hard work to produce. But we do it because we want to push the artists we like and who are equally fighting to survive. If everyone who reads our reporting, who likes it, helps fund it, our future would be much more secure. For as little as 5 US$, you can support Side-Line Magazine – and it only takes a minute. Thank you. The donations are safely powered by Paypal.
Tags: SD-KRTR, Studio-X