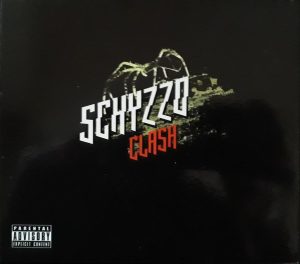 Background/Info: Schyzzo (also known as Schyzzo.com) are back on track after a hiatus of four years. After having released three albums (all on Advoxya) the Hungarian duo brings us an EP featuring a title track plus 2 alternative versions and 5 more songs.

Content: The influences running through “Clash” are easily recognizable and rapidly remind early Prodigy and Empirion. The songs are driven by breakbeats creating a dynamic production plus raw sound treatments. There’re less vocals on “Clash”, but you’ll notice robotic vocal treatments and samplings.

+ + + : It’s hard to innovate when dealing with breakbeats, but the least I can say is that Schyzzo took me by surprise. Their retro approach revealing great, raw sound treatments is absolutely amazing. It reminds me to Prodigy’s “Voodoo People” or Empirion’s “Narcotic Influence”. That’s more than simply a reference, but the songs are really well-crafted and this is the kind of stuff I’m missing today. It’s compact and accomplished production where you also can hear a few refined passages and numerous sound treatments.

– – – : I’m not saying that I’m missing more vocals, but it for sure can be an aspect the band has to reconsider and especially empower.

Conclusion: The shadow of some famous and legendary breakbeat pioneers is recovering this production, but Schyzzo confirms it’s still possible to compose good-old breakbeat stuff with an extra and more personal dark touch on top.

Since you’re here … … we have a small favour to ask. More people are reading Side-Line Magazine than ever but advertising revenues across the media are falling fast. And unlike many news organisations, we haven’t put up a paywall – we want to keep our journalism as open as we can. So you can see why we need to ask for your help. Side-Line’s independent journalism takes a lot of time, money and hard work to produce. But we do it because we want to push the artists we like and who are equally fighting to survive. If everyone who reads our reporting, who likes it, helps fund it, our future would be much more secure. For as little as 5 US$, you can support Side-Line Magazine – and it only takes a minute. Thank you. The donations are safely powered by Paypal.
Tags: Schyzzo