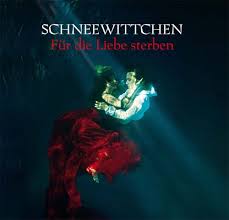 Content: Marianne Iser and Thomas Duda have been active under the Schneewittchen duo since the early millennium years. They have already released several albums and are now back on track with the rather romantic sounding “Für Die Liebe Sterben.”

If you don’t know of this band yet, it will quickly become clear that Schneewittchen is mainly –and probably only, meant to conquer the German scene. This work is something really special, but unfortunately not always that convincing. The members for sure have an interesting and noticeable image, but the sound is not really captivating. There’s a kind of mix between different influences, which in the end become all related to an interpretation of pop music. “Wir Machen Musik” is an interesting opener for its kind of German goth-pop approach while the electro sequences are reminding me to the kind of ping-pong sequence of the legendary hit “Da Da Da” from Trio.

Schneewittchen definitely strives for something different although experimenting with new-wave-pop passages. But in the end it all left me rather skeptical. I enjoyed the somewhat old-school influences running through songs like “Ich Will Gefühl” and “Wolfsmutter”, which clearly remind me of new-wave ingredients. But that’s not enough to get wild of this work. Most of the songs are pretty quiet –maybe too quiet while the composition is missing a climax. Last, but not least I’ve some reservations about the global sound production and mixing, which suffers from maturity. I can imagine that this band will appeal to some fans in their homeland, but there’s not enough substance to conquer an audience outside the borders.

Conclusion: I prefer the artwork (cool digipak) instead of the music, which says enough about the poorly inspired content of this work.