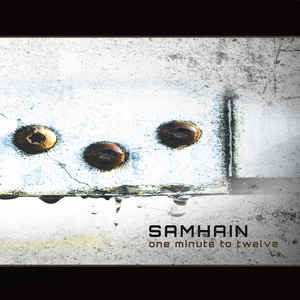 Background/Info: Slovakian trio Samhain saw the light of day back in 1996 and released their official debut work (cf. “Violent Identity”) in 2006 on Aliens Production. It took them 10 years to accomplish this new opus, which is available as limited edition featuring a bonus disc.

Content: This work sounds like a new start. After a pure industrial and experimental-like intro, the real sound and influences of Samhain are progressively coming through. The band clearly deals with IDM mixed with some extra influences such as industrial sound treatments, dubstep passages and electronic experimentation.

The work is characterized by overwhelming sound treatments mixed with diversified effects and some bombastic parts. Notice by the way that the titles of this album somewhat refer to political- and social topics (cf. “Democracy”, “Islam Perversity”, “Great Country”, “Horror Madness”…).

+ + + : When you think IDM you clearly expect a real sound intelligence in the creation and manipulation of sounds. That’s precisely what this album stands for. This is a diversified intelligent electronic trip carried by slow, danceable rhythms, but also with bombastic passages. The impressive sound effects and heavy sonic blasts are progressively leading the work towards multiple climaxes. There’s a delicious contrast between heavy elements at one side and refined bleeps and arrangements at the other side.

– – – : No doubt about this work: I like the sound and album of Samhain and yet I’m sure this combo has the potential to do even better. I sometimes get the impression that they don’t reach the absolute climax in the progression of their songs. But that’s not really a minus point. The only single thing maybe is that I expected a bit more out of both extra songs on the bonus disc while I noticed a few cool remixes.

Conclusion: Samhain strikes back with a rare sonic elegance mixed with intelligence and knowledge. This album sounds typically Aliens Production-like getting an ‘old’ label servant back in the spotlights.