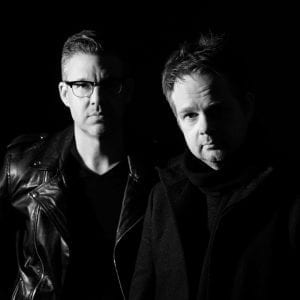 Alexander Braun and Manfred Thomaser both remain the single members on board of !distain. This German electro-pop formation is active since the 90s and their debut releases became an instant success. !distain has this ‘typical’ German synth-pop sound and belongs together with bands such as De/Vision, Beborn Beton, Melotron… to the cream of German synth-pop. By the end of 2018 they released their eight studio album “Farewell To The Past” on Echozone revealing !distain in good shape. I’d a chat with Alexander and Manfred.

Q: What does this new album means to you when you realize your debut album “Cement Garden” was released in 1995? Do you still feel the same emotions?

Alexander: Wow, it´s an amazing period of time. What still feels the same is the love for music. And at the same time of course so much has changed! That time we had a producer and we even spent the nights at his home. Today I really love to produce the music on my own. Naivety changed to ‘wisdom of age’… ha, ha. So this album (and its success) means a lot to me. We are still here, and it is still a very important part of my life!

Q: More than making simply music together, I think there must be a kind of chemistry to keep a band alive for such a long time. What makes this chemistry and partnership between you?

Manfred: In my opinion, respect is the most important thing. Alexander and I do have a lot in common, but we are very different, too. Those who can’t accept that other people may have other opinions, feelings, etc. may never find a way to deal with that. So, you need to understand the character of every band member. And you need to learn how to react to all the differences. Up to this the band is more important than the ego.

Alexander: Yes, and another very important aspect is that we would not be able writing these songs on our own. The quality of the song-writing is a result of combining our individual skills. There were so many moments when I thought the song is ok and then Manfred added some magic and it became something special…

Q: How much of the early work and writing process do you still recognize in the new work “Farewell To The Past” and how did you see yourselves evolving/growing as musicians?

Manfred: To me “Farewell To The Past” is mostly connected to “Raise The Level” which we released in 2007. Both records appear with deeper atmospheres and meanings. More melancholia than on “on/off” for example. The writing process on the other hand is more connected to “25 Frames A Second” when we spent a lot of time in the studio together working on the compositions and arrangements. This changes from time to time.

Alexander: The fact, that we now produce and mix the songs completely on our own gives us much more freedom. After so many years of making music it is the first time we have enough self-confidence doing everything on our own (besides mastering). I think in the course of time we get faster in realizing what works and what doesn´t, faster in singing the line with the best possible feeling and so on…

Q: Is there any particular and maybe explicit meaning behind the title of the new album and what have been the main lyrical themes you tried to achieve?

Alexander: Yes, the title of the album on one hand connects to Rick leaving !distain and the problems of the past. And on the other hand it is the chorus of one of my favorite songs on the album: “Letter To Myself”.

Manfred: The lyrics vary from being personal like “Wake Me Up” to being socially critical like “Der Hirtenmann” and “Wer Im Kreise Geht” or being a crime- and ghost-story like “The Guest-House”. Life is fragile. It can end every second. This is a theme maybe all lyrics deal with in the end.

Q: The song “SynthPopBoy”, which has been also released as EP-title track has something funny, but what did you try to express and what does it say about your own perception of the electronic music today?

Manfred: The basic idea is that there seem to be a lot of people who dislike something because they think it is common sense to dislike this something… which can be a song, a music style, a novel, art… whatever. For “SynthPopBoy” we have chosen Synth-Pop, which the ‘real tough guys’ do not like because everyone who listens to Synth-Pop is declared to be a weak person. And tough guys can’t be weak. Image means mostly everything to these people. By the way: we received a lot of reactions from fans saying ‘I know who you are talking about’… In the end “SynthPopBoy” is about accepting who you are. You like Synth-Pop? Why not? You like EBM? Why not? You like both? Why not?

Alexander: My perception of the electronic music of today is that it often should be kind of hard and aggressive stuff. Because then it is cool. But deep inside our hearts we all love melodies and positive feelings. The song calls for standing by it!

Q: A lot of things have changed and evolved since you started composing music. How do you experience all these changes – referring to technology & equipment, social media, streaming platforms, CD sales etc?  What do you see as the pros and contras?

Alexander: Yes, so many things have changed. Besides the decline of CD sales there are some good things, too; we get close to our fans via Facebook and other social media. The feedback to our music is much more direct and immediate. Making money with music has become so difficult, but on the other hand there is the chance to be discovered via streaming platforms. There are algorithms like ‘similar artist’ that maybe let people hear our music… although they don´t know us.