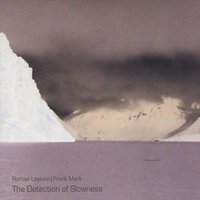 Background/Info: Roman Leykam and Frank Mark both are familiar artists active on the Frank Mark Arts roster. They’ve already worked together and released different albums. This project is something new bringing visuals and music together on DVD featuring 14 parts. “The Detection Of slowness” is the first music-film project by both artists.

Content: Both artists are experienced with ambient and experimental music genres. Roman Leykam plays guitar and guitar synths while Frank Mark did the vocals and samples. It all looks like Frank Mark has been more of a contributor to the work of Leykam.

The music reveals an ambient voyage, which is mainly constructed by guitar. Roman Leykam has this power to add a kind of emotion into his composition. Together with the images, which are dealing with an immense water and ocean view, the music brings visions of endless spaces alive. It all sounds very prospered and filled with mysteries. It clearly appeals for the listener’s imagination. A spoken, whispering passage accentuates the sensation of mystery.

+ + + : This work reveals the complementarity between music and visuals. Both elements and artistic arts reinforce the global ambient approach of the concept. The main strength for sure appears to be the guitar playing and treatments by Roman Leykam. This music has nothing in common with the familiar music genres featuring guitar, but reveals an evasive and dreamy play filled with delicacy and emotions.

– – – : The sound and images-formula becomes a bit repetitive after a while. The visuals are pretty similar and you rapidly experience a déjà-vu effect.

Conclusion: I like this kind of concept where different artistic styles are joining hands together. It all looks pretty experimental and minimal-like, but it definitely is one of the most accomplished releases from the Frank Mark Arts roster.