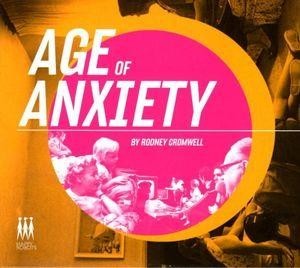 Background/Info: Rodney Cromwell is a new solo-project set up by Adam Cresswell. This artist was formerly involved in Saloon while he later on was member of the duo Arthur & Martha. “Age Of Anxiety” was already released a few months ago now and appears to be an irresistible piece of electro-pop.

Content: The main influences of this artist are clearly evoking the good-old 80s electro decade and some leading British formations like New Order, but also Heaven 17. Rodney Cromwell has been also introduced as getting back to the ‘krautrock’ of Kraftwerk. I have to admit that “The Blue Cloud” is definitely into Kraftwerk music.

“Age Of Anxiety” also features real weird passages like the opening cut, which is an adapted version sounding like a music box of the famous hymn “The Internationale”. I also refer to the final part of “You Will Struggle” for the pure disco gimmick reminding me of, “I Feel Love”. In the end I would say Rodney Cromwell simply mixes different elements of 80s electronic music.

The main essence of this release clearly appears to be a kind of fascination and even devotion for 80s electro-pop. Several of the bass lines are clearly inspired by New Order while some of the vocals are into a familiar robotic style. We quickly feel like we’ve traveled back in time to awake in the magic sound universe of the 80s.

↑↑↑: This work sounds like an ode to some early electro-pop music and reveals a few cool songs in the genre.

↓↓↓ : This is of course not the most original electro-pop production, but the main point that hurts is the lack of highlights. I get the impression that the songs haven’t been fully achieved, sometimes remaining in a demo format.

Conclusion: I like the influences running through this album, but I’m convinced there’s much more potential in it.

Best songs: “You Will Struggle”, “Barry Was An Arms Dealer”.