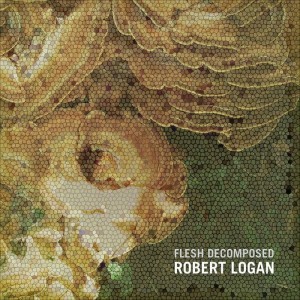 Background/Info: Robert Logan is a London based artist who last year struck back after a hiatus of 6 years. He unleashed the “Flesh”-album and this year released 2 albums together with Steve Roach. “Flesh Decomposed” moves on there where the previous album left off.

Content: There clearly is an ambient dominance running through this work. The atmospheres are often dark and always mysterious. Some Eastern sound flavor accentuates the mystic spirit of the composition while I also noticed a hint of female chants.

Other passages reveal an industrial input characterized by heavy noises. The ambient inspiration remains very present and reinforced by a cinematographic approach.

+ + + : “Flesh Decomposed” is a rather diversified piece of music mainly carried by ambient atmospheres and mysterious passages. The work has been masterly accomplished by an outstanding sound production revealing overwhelming sounds.  I also like the progression of some compositions.

– – – : I don’t see real negative points, but maybe a regret there are not more mystic passages, which would have possibly lead to a real climax.

Conclusion: Robert Logan is not the most familiar artist active at the ambient fields, but he definitely is one to discover. He reveals a somewhat different approach experimenting with multiple influences.