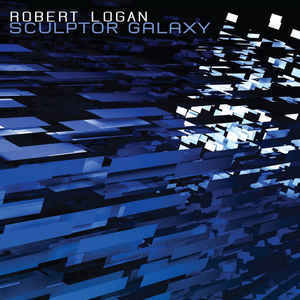 Background/Info: London based artist Robert Logan strikes back with a new solo-work, which was produced by Steve Roach. Both artists have previously collaborated together on the albums “Second Nature” and “Biosonic” (both released on Projekt as well).

Content: “Sculptor Galaxy” is an appropriate title for an album, which sounds as a truly ‘sound sculpture’. Robert Logan has used numerous field recordings from all over the globe and merged it together with acoustic instruments and electronic treatments. It’s now pretty minimal- and experimental like and then evasive- and even cinematographic minded.

Down tempo rhythms are sometimes evoking trip-hop influences, but globally speaking it remains an electro-minded sound sculpture, which has been achieved with numerous influences. You now and then can hear some whispering voices.

+ + + : I like the electro-ambient format of this album, which also characterizes the work of Robert Logan. It feels like this ambient input stands for the basis of his work while he next and quite progressively achieves his work with other elements. I like the slow rhythm running through the tracks while the whispering vocals inject a spooky touch. The tracks however sound pretty relaxing and sensitive as well. I like some melancholic passages. The experimental touch is also worthy of examination and I here noticed some subtle noise treatments.

– – – : From a very personal point of view I would have liked to hear a few more ‘vocals’ running through this work. The ghost-like whispers are pretty cool and I miss them on different cuts.

Conclusion: The ambient sonic universe of Robert Logan is one consisting of eclecticism; the ultimate point where experimental treatments are joined by elements of lounge music. I like this symbiosis.