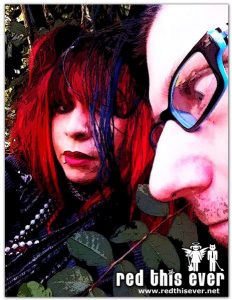 Background/Info: Baltimore based Red This Ever has released this EP as a kind of bonus to their sixth full length “Attack!”. The EP features six new cuts plus four remixes.

Content: “Fringe” sounds in the same line as the “Attack!” album. This is electro-pop music with a polished production and great melody lines. Some passages are reminding me of good-old souvenirs from the new-wave period. The mix of electronics and guitar is perfectly balanced.

One remix was accomplished by Red This Ever while the other cuts have been remixed by Retrogramme, DJ Warrings and Val Cain.

+ + + : This EP sounds in the spirit of the album, but is a little bit more diversified. The songs remain carried by solid melodies. The fusion of electro-pop and wave-pop is one of the main characteristics and I dare to say strengths of this work. Electronics and guitar are in perfect harmony. The final song “Only Survivor” is a pretty cool piece in the genre, which reminds me a bit of a mix between De/Vision and And One with guitar on top. The vocals create a perfect twist with the music. Among the remixes I mainly recommend the more club-friendly “Irresistible – DJ Warrings Pirate Chant Remix”.

– – – : My only regret is quite similar as for the “Attack!”-album; there are several cool songs featured on this EP, but no real hit that could bring Red This Ever in the spotlights of electro-pop.

Conclusion: “Fringe” is more ‘free-styled’ electro-pop than the last Red This Ever-album, but it’s a cool mix of different influences, which will appeal for electro-pop fans.

Tags: Chant, De/Vision, Red This Ever