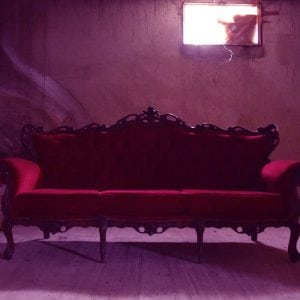 Background/Info: The band name Raskolnikov has been inspired by the word-wide famous Dostojevski’s novel “Crime And Punishment”. That’s a rather interesting beginning for this Swiss-French formation consisting of Jérôme Blum (drums), Pablo Garrido (guitar, electronics) and Mathieu Pawełski-Szpiechowycz (bass, vocals).

Content: Raskolnikov is not exactly composing the most classical kind of dark-wave or wave-rock music. Whatever you want to call it, the songs are more like bringing numerous influences together instead of belonging to an established style. There for sure are multiple influences reminding us to the 80s. The guitar play is one of the main characteristics and strengths of the work, adding emotion to the songs, but still creating an effect of elevation on other songs.

+ + + : The guitar play is the main aspect of this work that fascinates me. The guitar injects the power, the emotional side, but still creates a transcendental sensation on a few cuts. Especially the final passage of “Hunde Sind An Der Leine Zu Führen” creates a real climax. The electronic arrangements, which are more noticeable at “Poddanie Bezwarunkowie” are complementary with the guitar play. I also like the vocals, which especially at the beautiful, opening song “Stockholm” are expressing grace.

– – – : I personally like the opening part of the album while the final one can’t convince me. About the opening part I would say the songs make sense and are well-crafted although missing a real apotheosis (by exception of the aforementioned “Hunde Sind An Der Leine Zu Führen”).