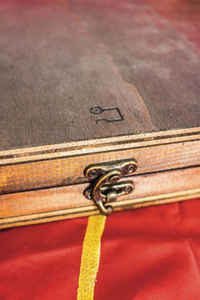 Background/Info: QDOR is a mysterious Italian combo driven by ritual themes and dealing with experimental music. ‘QDOR is a cult born in Pordenone in 2014; an ancient belief system animist influenced by the Menocchian cosmogony, a vision of a miller that lived in Montereale Valcellina (Pordenone) in the XVI century’. The work is featured in an artistic wooden box and contains 2 cassettes plus relics for the ‘adepts’ (read the ‘fans’). There’s a ‘red’ featuring 3 tracks and a ‘white’ tape featuring an extra track. This is the so-called ‘superior edition’ while the ‘red’ tape is also available apart as a ‘devoted edition’.

Content: QDOR definitely deals with experimental music. The tracks are fragmented and sometimes reinforced by ambient sonic signals and spooky whispers. The ritual aspect of the concept is hard to find, but somewhere hidden in the enigmatic voices running through the work.

The tracks are rather monotone and in a long-duration, but become a bit more accessible by their ambient elements. The extra cut from the ‘white’ cassette reveals strange and frightening crystalline signals adding some diversity to the composition.

+ + + : QDOR is a band with a concept and devoted to mystic themes and obscure rites. That’s a rather intriguing element I always have liked. The main strength of their creation is the constant experimental approach, which seems to have been composed by self-crafted instruments. Their modus operandi reminds me of some obscure, but great 80s formations. The great artwork definitely is one of the major elements of this release.

– – – : QDOR has an interesting conceptual approach, which I expected to be more ritual-like. I’m not saying that the concept and image are more important than the composition, but I for sure expected a bit more out of it. “I” sounds complex and is what I would call ‘difficult’ music to listen to.

Conclusion: QDOR has definitely found the right label to release their obscure and extreme, experimental sounds. They now have to find the adepts to follow their cult!