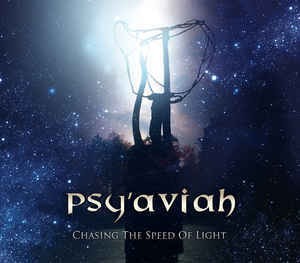 Background/Info: No doubt about it, Psy’Aviah is one of the most atypical electro underground bands. The Belgian formation driven by Yves Schelpe earlier this year confirmed its electronic eclecticism on the album “Seven Sorrows, Seven Stars”, which is their sixth full length. Schelpe and his female army of guest singers strike back with an EP featuring 17 cuts!

Content: This EP features 3 parts. You first get “Radio Edit” versions from 2 songs originally released on their last album plus one new song featuring Lis Van Den Akker. “Alcubierre Drive” featuring the sensual vocals of Kyoko Baertsoen remains a unique and dreamy piece of electro-pop while “Not What I Expected” featuring Fallon Nieves sounds like a trance-pop transposition of Praga Khan. The new song “Alone” is something totally different and in a pure commercial-like dance-pop style.

We next get an important remix part featuring numerous remixes of “Alcubierre Drive” and “Alone”, but also a remix of “Not What I Expected” and 2 remixes of songs featuring Mari Kattman. Among the remixes you’ll find bands like Avarice In Audio, Cyborgdrive, Etasonic feat. Andre H, Antibody, Diskonnekted, Koner and Tim Iron.

The last part is something different revealing earlier material like 4 instrumental tracks that were composed for theater Music in 2002. We here get a more conceptual and cinematographic exposure of Psy’Aviah.

+ + + : Yves Schelpe confirms his diversified taste for electronic music. He feels comfortable composing sensual electro-pop, confirms his talent for harder, danceable and somewhat trance-like songs and takes us by surprise revealing pure dance-pop music on the edge of commercial music. “Alone” is a song, which can really become a commercial hit and the remix of Etasonic feat. Andre H is even more dance-like.

Speaking for myself I prefer the trance approach of  “Not What I Expected”, which is a great dance-piece with some dirty female vocals. Among the remixes I heard a great and totally reworked version of “Alcubierre” by Diskonnekted.

– – – : Okay for the “Radio Edit”-songs and different remixes, but the more conceptual earlier work is something too different, which is not matching with the main part of this EP. You can put a lot of stuff on an EP, but in the end it still has to sound compact and that’s what I’m missing here. Another reflection consists of the real ‘dance-commercial’ side of Psy’Aviah revealed on “Alone”. It’s a great production and I really believe this song has the potential to become a hit (it makes me think to what happened with Delerium’s “Silence”), but on the other side it creates a schizophrenic feeling, like a band showing real different faces.

Conclusion: This is without a shadow of a doubt the most versatile release by Psy’Aviah. You for sure will find something to your taste while discovering talented singers, but I’m missing some cohesion between all the influences.

Best songs: “Not What I Expected – Radio Edit”, “Alcubierre Drive – Diskonnekted vs. J. Wolf Remix”, “Lessons From The Past – Tim Iron Remix”.