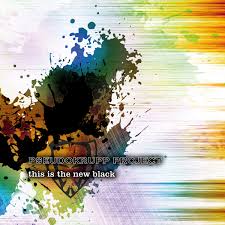 Background/Info: Hailing from Berlin (Germany) Pseudokrupp Project has mainly self-released all its productions since their beginning. The album “2009 – Vor Underer Zeit” released in 2009 on Codeline Records was the band’s single ‘official’ work until they got signed to Infacted Recordings. “This Is The New Black” was released early November 2018.

Content: The first half of the album reveals a dark-electro sound with explicit, melody lines and hopping rhythms. The second part of the work progressively evolves in EBM inspiration. The songs became harder while holding on to the particular rhythm running through this work. The vocals are sung in German and English and remind me now and then of Tyske Ludder for the powerful format.

+ + + : I definitely prefer the EBM side of the work for its power and the charismatic vocals. The vocals might appeal to lovers of Tyske Ludder, but I also have to mention In Strict Confidence. There’s a similar powerful and passionate expression. I also like the female backing vocals on “Faith In My Own Truth”. Sound-wise the work is characterized by strong melodies.

– – – : I’m not a huge fan of the opening tracks, which are more hesitant and unaccomplished.

Conclusion: Pseudokrupp Project is not exactly setting the EBM world on fire and can’t compete with some of the bands they’ve been compared to although “This Is The New Black” features a few cool songs.