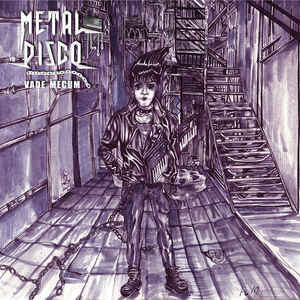 Background/Info: “Vade Mecum” is the second full length album by the Greek project Metal Disco. This project driven by Toxic Razor (still involved with other projects such as Paradox Obscur, Beatbox Machinery and owner of Werkstatt Recordings) also released a few noticeable EP’s.

Content: Metal Disco got some helping hand from a few guest artists/singers on this work. Keren Batok, André Savetier, Mind Teardown and Supernova 1006 joined in for a few songs. Sound-wise the main characteristic of the album remains the retro-elector style mixing elements as electro-wave, EBM, minimal-electronics and electroclash. The most surprising song is the cover version of Icon Of Coil’s “Former Self”.

+ + + : I remain fascinated by the magic of analogue equipment and that’s what this project stands for. Just pay attention for the great synth line running through “Endless Miles” featuring Supernova 1006 and you’ll maybe understand what I mean. But it’s not only about vintage sound treatments, the songs have been meticulously crafted and accomplished revealing great sound effects and bleeping sequences. I also like the somewhat sterile way of singing from guest vocalist Keren Batok (singing on 2 cuts).

– – – : My single regret is that most of the songs are pretty short. That was rather typical for the 80s and there’s nothing wrong with that, but when the songs are that good you sometimes would like to get a more extended format.

Conclusion: Metal Disco is not exactly innovating, but sounds as a refreshing and original project.