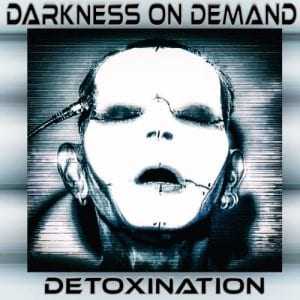 Background/Info: From Dance Or Die to Darkness On Demand not much has really changed in style and influences. Gary Wagner, Falgalas and Chris L. last year released their debut album “Post Stone Age Technology” and are already back on track with a new album in the pipeline. This EP has been released as an appetizer to the album, which will be also entitled “Detoxination”.

Content: The title song clearly appears to be one of the best songs from this ‘new’ project. It’s well-crafted piece of modern EBM with some Kraftwerk bleeps, great lyrics sung by the charismatic Gary Wagner. The song has been presented in 3 different versions featuring a remix by Intent Outtake.

Next to the main song we also get 3 more songs. These songs can be seen as exclusive B-side cuts and are more into an atmospheric approach.

+ + + : No doubt about it, “Detoxination” is an accomplished track and maybe the first ‘big’ hit for Darkness On Demand. It’s powerful and reminding the good-old Dance Or Die. I also like the lyrics. The remix by Intent Outtake and the “Maxi Version” are damned good versions. The band illustrates their composing skills and their taste for efficient sound treatments. Among the other tracks left “Why Don’t You Tell Me” is much more than simply a B-side track.

– – – : “Detoxination” is such a great song the other tracks left are a bit disappointing and especially “Gates Of Heaven” left me unmoved.

Conclusion: There’s no better way to announce a new album than releasing an EP with a brilliant title track!