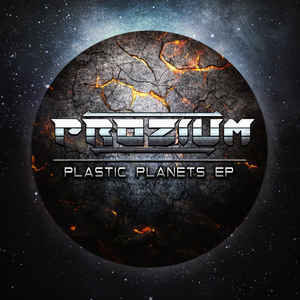 Background/Info: Prozium is one of the latest signings to the Alfa Matrix roster. This is one more Australian formation consisting of Lawrie Masson (Studio-X) and Gerry Hawkins (Avarice In Audio, Cryogenic Echelon, Dream Recall). They previously self-released an EP entitled “The World”. Most of the songs on this EP released on this official debut record, were only available in the digital format. “Plastic Planets” is more a kind of mini-album featuring 7 songs.

Content: This EP is like having 2 parts. You first get a somewhat experimental and main part revealing endless sound treatments and a few robotic words.

Quite progressively the work evolves towards more danceable passages composed with flat sound treatments and minimal techno-like elements. Another cut moves into a kind of gabber approach, but here again it all remains pretty experimental.

The two  last cuts reveal the real potential of the duo, which sounds rough and a bit more tech-trance as well.

+ + + : “Plastic Planets” mixes a rather abstract approach to electronics, which cover multiple influences together with hard-danceable cuts. I definitely prefer the dance vibes, which on “Set I! Off” reminds me a bit of Empirion for the raw treatments while the d’n’b cadence injects extra dynamics. The trance-touch running through “Shangai” is another attention grabber.

– – – : Speaking for myself I expected much more from this duo. I don’t have anything against experimentalism, but it sometimes sounds a bit improvised and without real substance. The two last tracks are definitely different and more interesting.

Conclusion: I can’t say that I’ve been disappointed by Prozium, but I’ve been used to hearing more exciting and creative work from this duo.