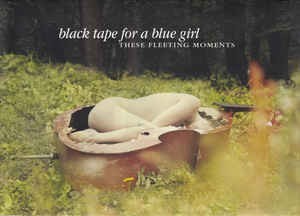 Background/Info: I realized that this year Black Tape For A Blue Girl celebrates its 30th anniversary. The American formation set and driven by Projekt owner Sam Rosenthal can look back at an impressive discography. We had to wait 3 years for this new work featuring 13 songs and mainly characterized by the ‘return’ of their former singer Oscar Herrera (after an absence of 17 years). The album also features a few guest artists like Brian Viglione (The Dresden Dolls).

Content: This band has always composed a unique sound accomplished by a deeply artistic approach. It’s nearly impossible to define the genre of Black Tape For A Blue Girl and it’s not that different with the new work. “These Fleeting Moments” takes the listener by the hand to travel throughout a beautiful sonic universe made of ambient passages and cinematographic impressions. It’s a kind of dark reverie, was composed by acoustic instruments and electronics. It sometimes moves into a ballad and quickly sounds sad and melancholic again.

Some tracks are driven by mysterious and somewhat Eastern-like atmospheres, like awakening the listener’s imagination. I also noticed somewhat psychedelic-like guitar parts and a few beautiful instrumental passages.

The vocals inject a real charisma to the work while female backing vocals by Dani Herrera creates a delicious ethereal effect and a perfect symbiosis with the male vocals.

+ + + : This album is an invitation to dream away and feels like a sweet caress filled with melancholia. It truly sounds like an artistic creation where electronics and authentic instruments create a delicious and enjoyable harmony. Some cinematographic passages have this magical power to awake your deepest hidden fantasies and I here especially would like to recommend “Please Don’t Go”. I also have to mention the opening cut, which is into pure magic and the more mysterious “Meditation On The Skeleton”, which is an appropriated title to describe your inner feelings when listening to this work.

– – – : Speaking for myself I would have liked to hear more ethereal passages and especially female heavenly voices, which is totally appropriated to this kind of music.

Conclusion: Black Tape For A Blue Girl is an invitation to a dream featuring images and stories created by your own mind. It’s an intimate experience in sound and once more a beautiful album accomplished by this legendary formation.

Since you’re here … … we have a small favour to ask. More people are reading Side-Line Magazine than ever but advertising revenues across the media are falling fast. And unlike many news organisations, we haven’t put up a paywall – we want to keep our journalism as open as we can. So you can see why we need to ask for your help. Side-Line’s independent journalism takes a lot of time, money and hard work to produce. But we do it because we want to push the artists we like and who are equally fighting to survive. If everyone who reads our reporting, who likes it, helps fund it, our future would be much more secure. For as little as 5 US$, you can support Side-Line Magazine – and it only takes a minute. Thank you. The donations are safely powered by Paypal.
Tags: Black Tape For A Blue Girl