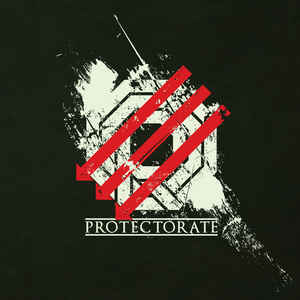 Background/Info: Protectorate is a Finnish solo-project set up by Cardinal Noire member Kalle Lindberg. The band has been already set up for a few years now and even self-released the EP “Come Fall” in 2012. This official debut album features 8 songs. A few guest musicians featuring Lasse Alander (Cardinal Noire) contributed to the album as well.

Content: “Protectorate” is an album inspired by the early EBM-school and immediately evokes bands like Skinny Puppy and Mentallo & The Fixer. There’s a similar complexity in sound supported by dense, dark atmospheres. The songs have been achieved with a fine taste for sound creation and oppressive atmospheres that color this opus with darkness. You’ll hear some guitar injecting a kind of industrial flavor to the work and here again it all reminds me of Skinny Puppy.

The growling vocals perfectly match with the haunting atmospheres running through this work. Protectorate deals with sonic terror, which finds its real climax during the final song.

+ + + : Protectorate no longer is one of the best-kept secrets from the dark-electro scene. This album reveals to be a true sonic puzzle featuring numerous little pieces made of dark rhythms, obscure sequences, fine noises, industrial guitar riffs, samplings and ghost-like vocals. This is the kind of work that will appeal to fans of Skinny Puppy and related formations.

– – – : It sometimes hard to differentiate the verses from the choruses. It’s not really a point, but the dense sound layers are ultra sophisticated and maybe not always accessible for a wider audience.

Conclusion: Protectorate is a fascinating formation, which has less in common with Cardinal Noire, but stands for an enlightening production based upon intelligent old-school EBM! This is a genius debut album.