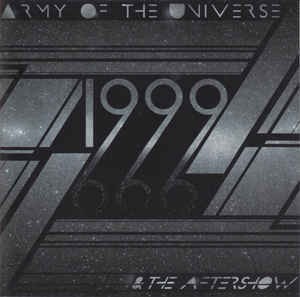 Background/Info: Army Of the Universe is an Italian formation based in L.A (USA). Set up by Albert Vorne (aka ‘Trebla’) and singer Lord K they later on were  joined by guitarist Davide Tavecchia. Chris Vrenna (NIN, Marilyn Manson, Tweaker) joined in to co-produce the debut album “Mother Ignorance” (2011). This year they released their third album to date.

Content: There are a lot of influences running throughout this work. It takes off with a hard and somewhat Prodigy-like sound mixing elements of rock, punk and electro. Quite progressively Army Of The Universe is experimenting other influences like trance, techno and pop while holding on a kind of naughty industrial sound basis.

They now accentuate the guitar playing and next transform themselves into mad sound manipulators creating heavy, blasting sounds and other filtered bleeps.

+ + + : “1999 & The Aftershow” sounds versatile, but the diversity will for sure catch the attention of a wider audience. I however prefer their harder cuts that somewhat remind me of The Prodigy and reveal a fusion between different influences. “Digital Slag” and “1999” both are great exponents in this genre. Army Of The Universe also confirms great skills liking to transform electronic sounds into a harder, industrial format.

– – – : Some dance-pop orientated cuts are not the most convincing part of the work, which in my opinion don’t totally fit with their harder ‘industrial’ side. Mixing different and sometimes opposite genres remains a big challenge where not many bands have succeeded.

Conclusion: Army Of The Universe is an industrial sonic chameleon, which metamorphoses itself into different genres and influences, but be careful with the ‘industrial’-minded side, which is their most dangerous and devastating one.

Tags: Army Of The Universe